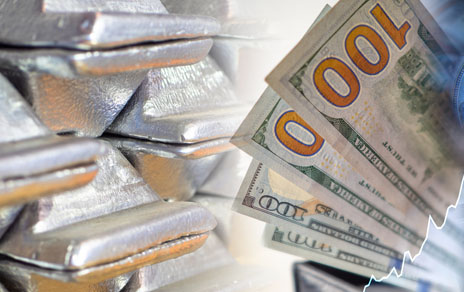 (Kitco News) - Although off its highs and back below $21 an ounce, silver is seeing its best week since July as it benefits from a short-squeeze rally; however, one research firm said that despite the short-term rally, investment demand will continue to weigh on the precious metal through the rest of the year.

In their latest report, analysts at Metals Focus said that they expect silver prices to end the year lower as strong physical demand won't be enough to counter weak investor interest due to rising bond yields and a U.S. dollar near 20-year highs.

"Despite the recent pullback in rate expectations and the impetus this has provided to precious metals, institutional investors still remain cautious about the outlook for the complex," the analysts wrote in their report. "In spite of the strength in underlying silver demand, this caution remains the biggest headwind for the silver price."

Weak investment demand for silver comes despite strong global physical demand. The analyst noted that India's physical silver market has been exceptionally healthy this year as imports of the precious metal total 6,239 tonnes.

"This already represents the third highest total on record and, even though the recent price gains may temper near-term imports, the forthcoming festive and wedding season and its associated jewelry and silverware buying mean it seems only a matter of time before India posts a new high, eclipsing 2015's record of 7,530t," the analysts said.

Metals Focus added that an insatiable appetite for the physical metal has impacted global inventories. Quoting data from the London Bullion Market Association, the analysts said that silver in London vaults has dropped to its lowest level on record going back to 2016.

At the same time, the analysts said that silver stored in Comex warehouses currently stands at 313 million ounces, the lowest level since June 2020. In the current environment, Metals Focus reiterated its call for the silver market to see another substantial supply deficit for 2022.

"Despite this, the silver price has struggled in recent months," the analysts said.

Rising interest rates and U.S. dollar strength are the two most significant factors keeping investors away from silver. Metals Focus noted that real interest rates, after starting the year at -1%, rose to 1.7% in September.

"Unsurprisingly, this has also underpinned dramatic gains for the dollar, which this year alone had risen, on a trade-weighted basis, by 19% through to late September. Although it has eased back over the past week or so, it still remains close to levels last seen in 2002," the analysts said.

Although bond yields have fallen from last month's highs, Metals Focus said that they should remain elevated as the Federal Reserve is expected to continue to raise interest rates.

"While rate expectations have been trimmed, further tightening is still expected, both this year and going into 2023, pushing yields higher and lending further support to the dollar. As a result, we believe that silver prices will face renewed selling pressure towards year-end, which is likely to continue into 2023, in spite of an increasingly supportive supply/demand backdrop," the analysts said.