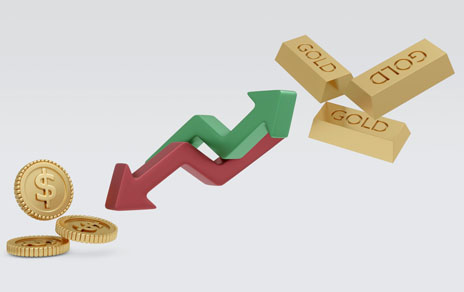 (Kitco News) - Although rising bond yields and an extraordinary rally in the U.S. dollar has created significant headwinds for gold, there is no doubt it remains an essential hedge for investors, according to one commodity analyst.

In a recent interview with Kitco News, Nitesh Shah, head of commodity research at WisdomTree, said that although gold has been in a downtrend through most of 2022, the precious metal is holding up relatively well.

Last week, when gold prices dropped to a two-year low, the market was down roughly 12% since the start of the year. This week, the precious metal has seen a short-covering rally pushing prices back above $1,700, cutting the loss to 6% year-to-date.

Shah said that according to his modeling, given how far bond yields have risen this year and the U.S. dollar's rally to a 20-year high, gold prices should be down 21% this year.

"I know some people have been disappointed with gold, asking why prices aren't higher given where inflation is but against this setup, gold is doing pretty well," he said. "If you are a nondollar gold investor, then gold prices are near record highs."

Shah said that he suspects the growing divergence between the physical market and the paper market is the reason why gold has performed well in the current environment.

The latest data from the Commodity Futures Trading Commission shows that bearish speculative positioning in the gold market is at its highest level in four years, which has weighed on paper markets.

While institutional investors have fled the gold market, Shah said retail investors are stepping in to buy the physical. He noted that premiums for gold and silver remain extremely high, an indication of a tight physical market.

"The physical market is providing a lot more support to the market than we might actually think," he said. "This is similar to what happened in 2013 when falling future prices unleashed major demand for the physical metal."

Shah added that the healthy appetite for gold is particularly visible in China as the nation can't important enough gold to meet demand as premiums hit record levels. In September, the Benchmark gold price on the Shanghai Gold Exchange rose $43 above the benchmark set by the London Bullion Market Association.

The record premiums come as Chinese gold imports rose to a four-year high in August.

Along with retail demand, Shah said that unreported central bank purchases could also be provided support for the precious metal. Shah said that he suspects the Russian central bank is buying domestic gold production as western sanctions have cut off the nation's access to global markets.

"We see a lot of gold flowing into China and yet premiums are pretty high. We don't have much information on where that gold is going," he said.

Although paper gold prices are expected to struggle in the near term, Shah said that he remains optimistic that prices will start to rise in 2023, rallying back above $1,900 by the third quarter.

"I don't think inflation is going away. I don't think central banks will be particularly successful in stamping out inflation and that will continue to be good for gold," he said.

Although the Federal Reserve is expecting to raise interest rates in 2023, Shah said he expects them to peak in the first half of the year; however, he added that he sees inflation holding around 5% through the third quarter.

He added that in this environment, investors will once again see gold as an important inflation hedge.