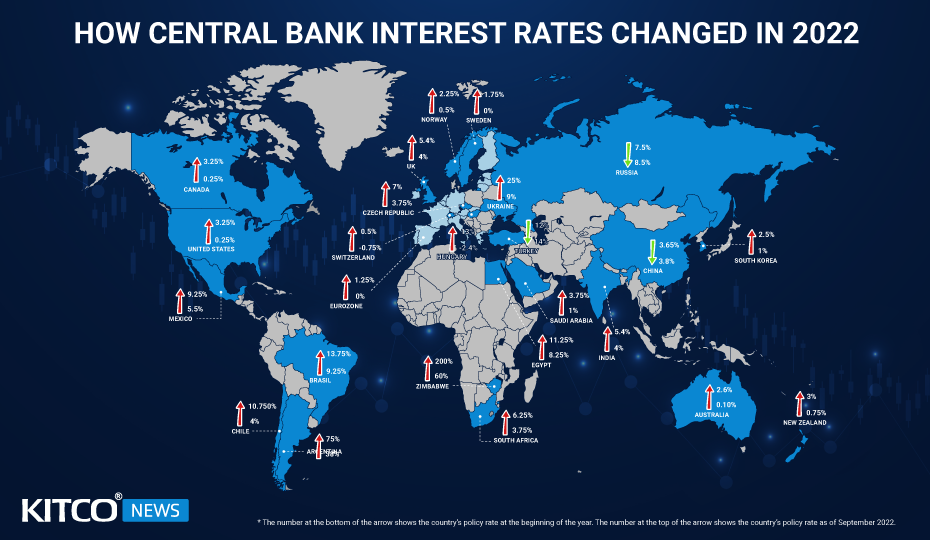 (Kitco News) Central banks worldwide have been on an unprecedented synchronized rate hike cycle that is raising some serious doubts, including a warning from the United Nations. And as recession fears become ingrained, is a global monetary policy pivot just around the corner?

This year saw some of the most aggressive moves in monetary policy history, with the U.S. and Canada raising rates by 300 basis points and the ECB hiking 125 bps. Some extreme cases included Zimbabwe raising rates by 14,000 bps and Argentina hiking 3,700 bps to fight surging inflation and currency devaluation.

On the other hand, there are instances like China, Russia, and Turkey, which cut rates to remain accommodative and support their economies.

One of the leading market risks going into the year-end is the idea that central banks have gotten ahead of themselves in their fight against inflation. Many analysts forewarn that rate hikes take between nine and 18 months to filter through. And hiking so much this quickly could end up slowing the economy too much down the road.

The World Bank weighed on this very topic last month, stating that simultaneous rate hikes could lead to a "string of financial crises."

This kind of "degree of synchronicity" between central banks has not been witnessed over the past five decades, according to the World Bank. And if these rate hikes are met with financial-market stress, the global economy will suffer.

"Global growth is slowing sharply, with further slowing likely as more countries fall into recession. My deep concern is that these trends will persist, with long-lasting consequences that are devastating for people in emerging market and developing economies," said World Bank Group President David Malpass.

The United Nations also spoke up this week, urging the Federal Reserve and other central banks to ease up on rate hikes, warning that tighter monetary policies are pushing the global economy into a recession.

"There's still time to step back from the edge of recession," UNCTAD Secretary-General Rebeca Grynspan said. "But the current course of action is hurting the most vulnerable, especially in developing countries and risks tipping the world into a global recession."

And in this macro environment, tighter monetary policy is mixed in with heightened geopolitical risk, including energy crisis, growing nuclear threat, and potential food shortages.

The Organisation for Economic Cooperation and Development (OECD) said the world is paying a "high price" for Russia's war in Ukraine.

"The global economy has lost momentum in the wake of Russia's unprovoked, unjustifiable and illegal war of aggression against Ukraine. GDP growth has stalled in many economies and economic indicators point to an extended slowdown," OECD Secretary-General Mathias Cormann said in a press release last week.

Europe will be hit the most in the coming year, with Germany anticipated to see a contraction in growth of 0.7% in 2023, the OECD added.

These are some big warnings coming at a time when financial risks are front and center. The intense market volatility in Britain alone has escalated contagion fears and forced the Bank of England to intervene in the gilt market via an emergency bond-buying program. The Bank of Japan also intervened recently to support the Japanese yen.

"We are likely to see more emergency action from central banks, which suggests global market risks are elevated," OANDA senior market analyst Edward Moya told Kitco News. "That's why you had a lot of bets building in support of a Fed pivot sometime soon."

Amid these worries, there are growing expectations of a Fed pivot in response to slowing economic growth.

Once the economy starts to slow, the Fed will "have to ease again," billionaire investor and Paulson & Co founder John Paulson said last week. The realization that the Fed is not in control will boost long-term inflation expectations and move gold higher, Paulson described.

After a third consecutive 75-basis-point hike in September, the U.S. central bank is expected to introduce another 75bps increase in November and an additional 50bps hike in December.

According to the Fed's updated federal funds rate projections, rates could go up to 4.4% by the end of this year and then rise to 4.6% in 2023.

Some analysts see inflation cooling off soon, allowing central banks to slow their rate hikes. ING, for example, estimates price pressures to come down "quite drastically" in 2023 and for the Fed to start cutting rates in the second half of 2023.

However, resilient job numbers out of the U.S. could put a pin in that. With the unemployment rate dropping to 3.5% in September, the Fed won't be in any rush to change its policy.

Markets are pricing in a 78% chance of another 75-basis-point hike at the November meeting, according to the CME FedWatch Tool.

Many have criticized the Fed's sole focus on inflation. According to ARK Investment Management LLC CEO Cathie Wood, the U.S. central bank is making a mistake with its aggressive rate hikes as it should be more worried about long-term deflationary trends.

She explained that gold, which is known for its inflation-hedge properties, is trading well below its peak of above $2,000 an ounce, while commodities like copper, lumber, iron ore and oil have dropped dramatically from earlier highs. Wood also noted that the U.S. economy is already likely in a recession, which will eventually weigh on prices and bring down inflation.

Wood's outlook is getting a nod from other big names, including Tesla and SpaceX CEO Elon Musk and DoubleLine CEO Jeffrey Gundlach.

In response to the question, "what should the Fed do?" Musk tweeted back in September that the U.S. central bank should "drop 0.25%." He added that "a major Fed rate hike risks deflation."

Gundlach also warned of a potential monetary policy error as the Fed runs away with rate hikes. He cautioned that using many oversized rate hikes in a row without pausing could lead to unexpected consequences.

"In spite of the fact that the narrative today is exactly the opposite, the deflation risk is much higher today than it's been for the past two years," Gundlach told CNBC in September. "I'm not talking about next month. I'm talking about sometime later next year, certainly in 2023."