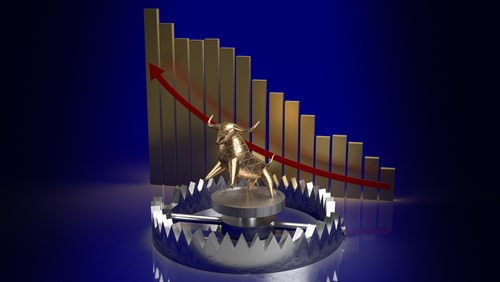 (Kitco News) The gold market is ending the week down nearly $90 from its October highs as investors renew their expectations of a very aggressive Federal Reserve into the year-end.

The 10-year U.S. Treasury yields crossed above 4% on Friday, while the U.S. dollar index neared 20-year highs after this week's macro data cemented the view of more rate hikes rather than a pivot from the Fed.

"This is getting dangerous for gold. The market is not showing relief with dollar strength. What makes this so tough is seeing the Japanese yen at levels lower than the Asian crisis and British pound in the midst of dealing with market financial stability risks," OANDA senior market analyst Edward Moya told Kitco News.

And from the policy side, U.S. officials are unlikely to intervene soon, letting the greenback rally play out. This week, U.S. Treasury Secretary Janet Yellen gave a nod of approval to the dollar rally, keeping gold in a precarious situation for the time being.

"We are looking at an environment where the dollar will trade off of safe-haven flows and Fed rate hike expectations," Moya noted.

What makes things worse is the changing Fed outlook. "Inflation is proving to be stickier. Markets will be slowly bumping up their Fed rate hike expectations. And that, to me, is a game changer for the gold outlook," Moya added.

In one week, the market went from pricing 125bps worth of hikes before seeing a peak to now looking for 175bps worth of increases, Moya explained. "This is not good news for non-interest-bearing gold," he said.

"Thursday's CPI data showed that inflation continues to be above expectations, and the core is moving higher. The Fed will have to give the impression that it is willing to do whatever is necessary to control inflation. Looking at the forward curve, the market is pricing in almost 5% by March," Melek told Kitco News.

The message coming from the Fed won't allow gold to sustain any rallies it gets, warned RJO Futures senior market strategist Frank Cholly. And the fact that gold failed to break above $1,740 last week is another negative sign for future price action.

"The Fed has room for more big rate hikes. Gold won't be able to rally in the face of these aggressive moves," Cholly told Kitco News. "Whether or not we can take out $1,600 is a big if. We are likely to re-test September's lows."

Gold has not spent much time below $1,600 an ounce since 2019, which makes some analysts worried about how low gold could fall if it breaks below that level.

Any negative macro news next week could work in favor of gold, added Moya, pointing to the first level of resistance at $1,675 an ounce.

"If we continue to get downbeat Fed regional surveys and the housing market shows further signs of cooling, that should support the argument that we are close to correctly pricing in how far the Fed could go with tightening. We also need to see companies announcing more layoffs as Beyond Meat did. The bad news is good news for gold," Moya noted.