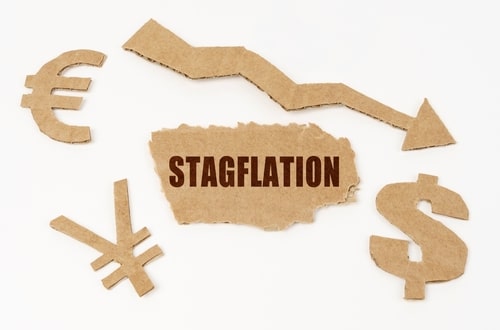 (Kitco News) The world could be facing a decade of stagflationary debt crisis like never before, warned Nouriel Roubini, CEO of Roubini Macro Associate and professor at the NYU Stern School of Business.

"The decade ahead may well be a Stagflationary Debt Crisis the likes of which we've never seen before," Roubini wrote in his latest Time essay.

The next crisis won't be like the previous ones due to the stagflationary aspect mixed in with massive public debt, Roubini explained as he gave examples from the 1970s and 2008.

"In the 1970s, we had stagflation but no massive debt crises, because debt levels were low. After 2008, we had a debt crisis followed by low inflation or deflation, because the credit crunch had generated a negative demand shock. Today, we face supply shocks in a context of much higher debt levels, implying that we are heading for a combination of 1970s-style stagflation and 2008-style debt crises—that is, a stagflationary debt crisis," he wrote.

Stagflation is an environment defined by high inflation and slower growth.

After 300-basis-points worth of rate hikes this year, it is now widely recognized that the possibility of a "soft landing" by the Federal Reserve will be a challenge. But how severe and persistent that economic slowdown will be is still much debated.

"The U.S. has already had two consecutive quarters of negative economic growth in the first half of this year, but job creation was robust, so we weren't yet in a formal recession. But now the labor market is softening, and thus a recession is likely by year's end in the U.S. and other advanced economies," Roubini noted.

There are enough signs to forecast that a severe stagflationary debt crisis will define the next recession.

"As a share of global GDP, private and public debt levels are much higher today than in the past, having risen from 200% in 1999 to 350% today. Under these conditions, rapid normalization of monetary policy and rising interest rates will drive highly leveraged households, companies, financial institutions, and governments into bankruptcy and default," Roubini explained.

Roubini pointed out that a traditional asset portfolio will not work in this macro environment, with a 60/40 portfolio of equities and bonds seeing massive losses in 2022 for the first time in decades.

In light of this, investors need to seek assets that protect against inflation, political and geopolitical risks, and environmental damage. And that includes gold.

"These include short-term government bonds and inflation-indexed bonds, gold and other precious metals, and real estate that is resilient to environmental damage," Roubini added.

Will the Fed and other central banks blink?

When faced with a stagflationary environment, central banks risk a persistent rise in inflation if they pivot. However, Roubini does not rule out such a scenario.

"There is a chance that central banks will wimp out and blink, and not be willing to fight inflation. In this case the Great Moderation of the past 30 years may be over, and we may enter a new era of Great Inflationary/Stagflationary Instability fed by negative supply shocks and policymakers—as in the 1970s—being unwilling to fight the rising inflation," he said.

At this point in time, central banks are in the so-called "debt trap," Roubini described. "Any attempt to normalize monetary policy will cause debt-servicing burdens to spike, leading to massive insolvencies and cascading financial crises," he wrote.