Inflation remains a threat around the world, central bank tightening will keep a lid on gold for now 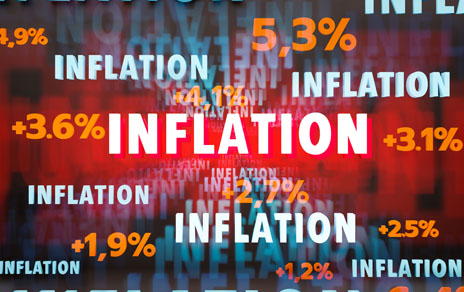 (Kitco News) - Rising consumer prices remain a threat worldwide and will continue to force central banks to tighten their monetary policies, which could ultimately keep a lid on gold prices, even against international currencies.

Wednesday, markets received inflation data from Britain, the European Union and Canada. The United Kingdom showed the hottest rise in consumer prices driven by food prices. The Office for National Statistics said its consumer price index (CPI) increased by 10.1% for the year in September. According to consensus estimates, economists were looking for annual inflation to rise by 10.0%.

After a brief dip in August, British CPI has risen back to its highest level in 40 years. The persistent inflation threat comes as the British economy continues to recover from recent market volatility after newly appointed Prime Minister Liz Truss introduced a massive spending plan financed by increasing the nation's debt.

The new government was forced to tear up that plan after the Bank of England intervened in the domestic bond markets to reduce some of the volatility.

"With the country's economic prospects looking bleak, a higher-than-expected inflation reading adds to the woes faced by British policymakers," Pierre Veyret, technical analyst at ActivTrades, said in a note.

However, some market analysts have noted that although inflation remains high in the U.K., the government's U-turn on its spending plan has calmed markets, giving the Bank of England a little breathing space as it fights inflation.

Currency analysts at DailyFX.com stated that markets are pricing in a 66% chance that the BOE will raise interest rates by a full 1.0% when it meets next month, which is down from where expectations were before the government abandoned its spending proposals.

"A 75bp hike could be the smart move by the BoE considering the impact rising rates have had on the housing market and cost of living in general," said Zain Vawda, an analyst at DailyFX.com. "The Bank of England still faces a tough task with a lot to consider heading into its November meeting."

Across the Channel, Eurostat said that the final CPI rose 9.9% for the year in September, down from the initial estimate of 10.0%.

Although inflation was lower than expected, economists note that it remains persistently high.

"The big picture is that underlying price pressures across the region are broad-based," said Jack Allen-Reynolds, senior European Economist at Capital Economics.

"We think core inflation will remain well above 2% for some time. That will keep the pressure on the ECB to raise interest rates aggressively even as the economy falls into recession," he added.

"The Bank of Canada has clearly not slayed the inflation dragon yet, and is therefore set for another large increase in interest rates of at least 50 bps next week," said Karine Charbonneau, senior economist at CIBC.

However, market analysts at TD Securities expect the Bank of Canada to be even more aggressive as the bank calls for a 75-basis point move next week.

"The Bank has grown increasingly concerned with the inflation backdrop and potential for long-term inflation expectations to become unanchored, and this data does not provide any evidence that inflation has turned," the analysts said.

The broader inflation picture adds to what is happening in the U.S., which saw its consumer prices rise 8.2% last month, rising more than expected.

Looking at the gold market, analysts have said that the precious metal could continue to suffer as central banks worldwide continue to raise interest rates.

"It's going to be a tough environment because no matter where you are, you are fighting central banks," said Bob Haberkorn, senior commodities broker with RJO Futures.

However, Haberkorn added that investors shouldn't completely ignore gold and silver in the current environment. He said it still makes sense to have some protection as global economic uncertainty remains high.

Haberkorn pointed out that potential gold investors should establish a position now with a long-term view that gold prices will be higher a year from now. He said that buying longer-duration calls could also be an attractive play.