It's 'not advisable' for Russia to buy gold to boost reserves, says country's central bank 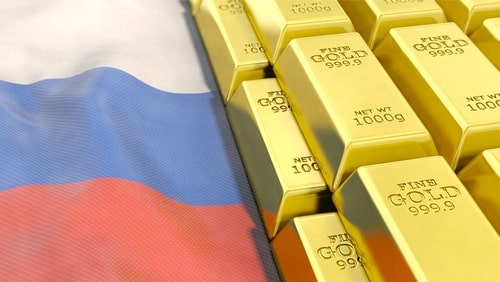 The Russian official's comment was in response to a question about whether the central bank could support the country's gold mining industry by buying up all the unsold precious metal. Earlier this year, countries including the EU, U.S., UK, Canada, Switzerland, and Japan banned imports of Russian gold in response to its invasion of Ukraine.

However, the answer revealed more about Russia's money supply policy than its plans for the gold miners.

"In terms of adding gold to Russia's reserves, it is not advisable at the moment because it will push the growth of the money supply," Interfax quoted Zabotkin as saying Tuesday.

Zabotkin pointed out that the Ministry of Finance has the power to determine how much it wants to spend on additional gold reserves and what volumes would be reasonable.

"The government can also consider support of the sector within the framework of industrial policy implementation, but the target support of economic sectors is not part of the central bank's mandate," Zabotkin added.

In September, Russia's annual inflation slowed to 13.68% from August's 14.30%, according to data from the statistics service Rosstat. The numbers are still significantly elevated compared to Russia's central bank's inflation target of 4%. Last month, the Bank of Russia cut rates to 7.5%.

In the meantime, Russians have been embracing precious metals this year as protection against risk and inflation.

At the beginning of the month, local media reported that Russia's largest lender Sberbank sold 100 tonnes of precious metals during the first nine months of the year.

More specifically, Sberbank customers have opened 300,000 new unallocated metal accounts between January and September. According to the bank, nearly seven tonnes of that was gold, 89 tonnes was silver, and a tonne each of platinum and palladium. On gold, Russians spent around $550 million at Sberbank.

Sberbank is not the only bank witnessing this trend. Other local banks have reported a surge in demand for gold. At one point, the country's central bank even had to temporarily halt the country's own gold purchases from local banks to leave the inventory for regular consumers.

In March, Russian President Vladimir Putin signed a law scrapping the 20% value-added tax on metals purchases. The move was designed to encourage the buying of precious metals over foreign currencies, such as the U.S. dollar and euro, at a time when the Russian ruble was plummeting.