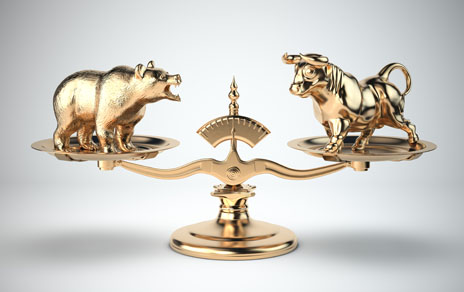 (Kitco News) - The gold market has pushed back above $1,650 an ounce, bouncing off a new two-year low hit mid-week; however, persistently bearish sentiment could limit gains next week, according to the latest Kitco News Weekly Gold Survey.

For the third consecutive week, Wall Street analysts are solidly bearish on gold prices in the near term; at the same time, bearish sentiment has a slight advantage among retail investors.

The gold market was looking to end the week with sharp losses; however, shifting interest rate expectations Friday provided some new bullish momentum in the precious metal. According to the Wall Street Journal, some members of the Federal Reserve are contemplating slowing down the pace of rate hikes after November as volatility and uncertainty dominate financial markets.

According to the CME FedWatch Tool, markets still see interest rates peaking above 5% in early 2023.

He added that he is neutral on gold in the near term as rising interest rates will continue to support the U.S. dollar near its 20-year highs.

"I don't think you need to chase this market on this rally," he said. "We haven't reached the end of this tightening cycle and that could keep pressure on gold."

The gold market is looking to end the week in slightly positive territory. December gold futures last traded at $1,656.40 an ounce, up 0.5% compared to last Friday.

Adam Button, chief currency strategist at Forexlive.com, said that although gold looks attractive in the long term, he remains bearish next week as the Federal Reserve isn't ready to pivot yet, which supports the U.S. dollar.

"Buyers are waiting in the weeds, just ready to buy gold. They are waiting for the U.S. dollar to top out," he said. "Every time we see rumors of a pivot, gold prices start to move higher, but the rumors end up being too early. Your best option is to wait for a better moment to buy gold."

Ole Hansen, head of commodity strategy at Saxo Bank, said that he is neutral on gold as interest rates will continue to increase.

"With peak rate expectations not yet met. A weaker dollar will be needed to shift the sentiment in gold. Until that happens, investors play gold from either a bearish or neutral stance. I prefer the neutral one," he said.

However, some analysts still remain bullish on gold as rising bond yields continue to take their toll on the global economy.

"Contrary to the Treasury Secretary's assertion that the system is functioning well, it is fragile, as the Bank of England's intervention in the gilts market showed; we shall see more incidents such as this. In such an environment, gold should flourish," he said.