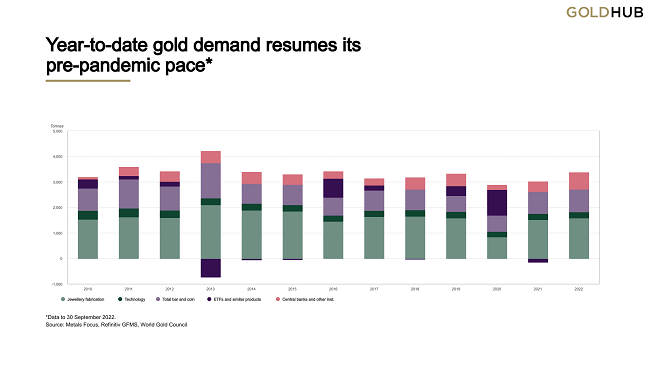 (Kitco News) - Despite persistent bearish sentiment in future markets and outflows in exchange-traded products, there was still solid demand for physical gold in the third quarter, according to the latest research from the World Gold Council.

Monday, in its latest quarterly demand trend report, the WGC said that physical gold demand totaled 1,181 tonnes in the third quarter, increasing 28% from the third quarter last year. At the same time, year-to-date gold demand is up 18% compared to the first nine months of 2021.

Juan Carlos Artigas, global head of research at the World Gold Council, said in an interview with Kitco News that global gold consumption has returned to prep-pandemic levels, driven by an increase in jewelry, solid demand for bars and coins and consistent purchases from central banks.

The rise in physical demand comes as the investment market, driven by outflows in global gold-backed ETFs, dropped by 47% or 227 tonnes to 124 tonnes.

However, Artigas said that the latest report shows that the gold market is driven by more than just investment demand in paper futures and ETFs.

"Gold continues to prove itself as a global market," he said. "You can't use just one label to define the gold market. Gold's diverse source of demand is why it should have a strategic place in an investor's portfolio."

There continues to be a growing dichotomy in the gold market as retail consumers bought 351 tonnes of physical bullion in bars and coins from July to September, increasing 36% compared to the third quarter of 2021.

"Retail investors bought gold as a store of value amid surging global inflation, while ETF investors reduced their holdings in the face of rising global interest rates," analysts said in the report, describing the widening gap in the marketplace.

Artigas said that strong physical demand is one of the reasons why gold has been one of the best-performing assets this year. Aggressive central bank monetary policy tightening around the world has weighed heavily on the price, with the precious metal seeing its seventh consecutive month of losses in October, its longest monthly losing streak since the 1960s. However, Artigas said gold's losses need to be put in the broader market context. The precious metal has outperformed equity and bonds, he said.

According to research from the WGC, with 10-year yields trading above 4% and the U.S. dollar holding near its highest level in 20 years, gold prices should be trading down 30%. December gold futures are down roughly 10% year-to-date as prices remain below $1,650 an ounce.

"Part of the reason why gold has held up well this year is because there is still demand in the marketplace," said Artigas. "Our research shows that gold remains on solid footing."

Although investment demand for gold has been lackluster through 2022, Artigas said that many investors are starting to recognize gold's relatively strong performance and sentiment, while still bearish appears to be shifting. He added that they see signs that some of the traditional headwinds for gold are starting to ease.

The biggest hurdle for gold this year has been the Federal Reserve's aggressive monetary policy stance. While the U.S. central bank is not expected to end its rate hike cycle anytime soon, Artigas said that it is getting closer to its terminal rate.

"Opportunity costs for gold are starting to stabilize," he said. "Many of the risks investors use gold to hedge against remain. Inflation and the need for capital preservation have not gone away."

Although the gold prices are responding to short-term weakness in ETF and futures markets, Artigas said that retail investors are using physical bullion and jewelry as long-term safe-haven and wealth preservation assets.

While investment demand in gold continues to dominate financial headlines, the WGC said that the market has seen solid growth in another significant pillar. Global jewelry demand grew to 523 tonnes in the third quarter, up 10% from the third quarter of 2021. Jewelry purchases were also above the five-year average of around 500 tonnes.

The WGC said that India led the recovery, with the nation consuming 146 tonnes of gold during the third quarter, an increase of 17% from last year and the strongest third-quarter performance since 2018.

"This signals a continued normalization of the market to pre-COVID levels of activity, aided by a pullback in the gold price in many markets during the quarter. Q3 also saw a further build-up in inventories as growth in fabrication exceeded that of consumption," the analysts said.

The third pillar of strength for gold continues to come from the official sector as central banks diversify further away from the U.S. dollar and increase their exposure to gold. Central banks bought nearly 400 tonnes of gold in the third quarter, up 300% from the last year's dismal demand.

"This is the largest single quarter of demand from this sector in our records back to 2000 and almost double the previous record of 241t in Q3 2018," the analysts said in the report. "The continued trend of official sector demand for gold corroborates findings from our 2022 annual central bank survey, in which one-quarter of respondents stated their intention to increase gold reserves in the next 12 months (up from one-fifth in 2021)."

Not only did gold consumption grow in the third quarter, but the report noted another indication of strength as investors appear to be holding on to their physical metal with declining recycling rates.