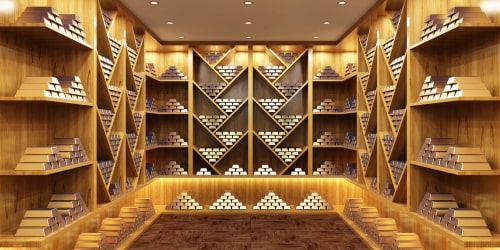 (Kitco News) Gold purchases from central banks reached a record during the last quarter, revealed the World Gold Council's quarterly report. But the caveat was that the big players remain anonymous.

A total of nearly 400 tons was bought by central banks in the third quarter, the most on record. This also marked a 300% jump from the same period a year ago, the World Gold Council said in its Gold Demand Trends report released Tuesday.

Year-to-date, central banks bought 673 tons, more than any other annual total since 1967 — when the U.S. dollar was still backed by gold.

Turkey, Uzbekistan, and Qatar emerged as the biggest known buyers. But there was still a sizeable unknown contingent. "The level of official sector demand in Q3 is the combination of steady reported purchases by central banks and a substantial estimate for unreported buying," the WGC's report pointed out.

Countries known for not reporting their gold purchases regularly include China and Russia.

"Not all official institutions publicly report their gold holdings or may do so with a lag. It's also worth noting that while Metals Focus suggests purchases occurred during Q3, it's possible they may have started earlier in the year," the report noted.

From what is known, the emerging market banks are leading the pack in official gold purchases.

The biggest net seller in the third quarter was Kazakhstan, which reduced its gold reserves by 2 tons. "It is not uncommon for central banks who purchase gold from domestic sources to swing between buying and selling," the WGC said.

Click here to look at other parts of the WGC's report.

Record gold purchases by central banks are in contrast to what has been happening with the gold price. The precious metal has been falling for seven straight months in response to aggressive tightening by the Federal Reserve that is boosting the dollar and U.S. Treasury yields.

Seven straight months of losses have not been seen in the gold market for more than five decades.

Also, strong gold-backed ETF outflows have weighed significantly on prices, and many analysts don't see the trend changing until there is some sort of a pivot from the Fed.

For example, Standard Chartered is looking for continued gold-backed ETF outflows for the rest of the year and a small net inflow next year. "Turning point comes when the Fed pivots. The dollar strength is likely to persist in the next few months," Suki Cooper, executive director of precious metals research at Standard Chartered, said in a recent webinar.