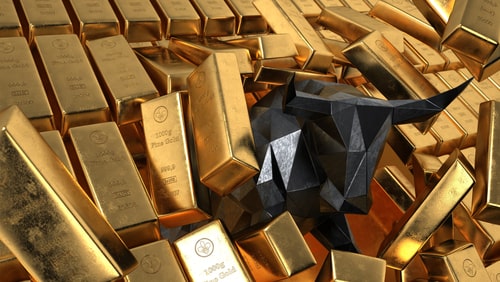 (Kitco News) Even though gold prices tumbled in response to Federal Reserve Chair Jerome Powell's hawkish stance, gold's path during the next year will be defined by gains, Capital Economics said in its latest outlook.

The Fed has confused the markets with its mixed messages following its fourth 75-basis-point hike Wednesday. In the statement, the U.S. central bank said it will now consider "the cumulative tightening" of monetary policy and "the lags with which monetary policy" affects economic activity and inflation.

At the same time, Powell followed that up with comments that the "ultimate level" of interest rates would likely be higher than previously thought while also saying that the window for a soft landing has "narrowed."

Yet, Capital Economics is not convinced that the Fed can remain hawkish for much longer.

On top of that, the U.S. dollar, which has been a big obstacle for the precious metal, will reach its peak next year and begin to decline, helping gold recover.

"A stronger dollar makes purchasing gold and silver priced in dollars outside of the U.S. more expensive. If we are right and the slowdown in global economic growth will trough at around the middle of next year, then we think improved risk appetite will then lead to a weaker dollar," Gardner wrote.

And the final piece that will boost prices will be demand for gold, which will be robust, especially when it comes to central bank purchases, Gardner added. "Central banks purchased 673 tonnes of gold in the first nine months of this year, a multi-decade high for January to September," he said.

This week, the World Gold Council published its Gold Demand Trends report, revealing that gold purchases from central banks reached a record during the last quarter. And the buying is expected to continue due to geopolitical tensions.