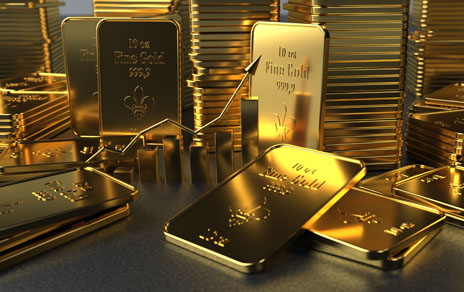 (Kitco News) - The gold market is no longer afraid of the Federal Reserve's aggressive interest rate stance as a critical recession marker has hit its highest level in four decades, according to some market analysts.

Gold prices are seeing some significant momentum early Friday as investors react to the news that the yield on two-year notes rose more than 50 basis points above 10-year yields. This is the most considerable yield curve inversion since the 1980s, which was also the last time the Federal Reserve was this aggressive in tightening interest rates.

December gold futures last traded at $1,665.70 an ounce, up more than 2% on the day. Also helping the gold market is renewed bargain-hunting as the price has managed to hold critical support above last month's low near $1,621 an ounce.

Many economists have noted that an inversion of the yield curve - the cost of short-term borrowing outpaces long-term costs - has always preceded a recession.

"The threat of a recession is at its highest level in 40 years, and that will continue to support gold prices," said Ole Hansen, head of commodity strategy at Saxo Bank.

Although markets continue to expect the Federal Reserve to aggressively raise interest rates through 2023, Hansen said that those expectations could quickly shift as the recession threat materializes.

"Investors are quickly going to realize that the Fed will not be able to get inflation back to its 2% target. We expect to see slower economic growth and inflation between 4% and 5% and this environment will be bullish for gold."

Bullish sentiment has been quietly building in the marketplace this past week after the World Gold Council said that global physical demand for gold increased by 28% in the third quarter. Along with solid retail demand, the report noted that central banks bought nearly 400 tonnes of gold between July and September, the largest single quarter of purchases on record.

Although the precious metal market has seen solid retail demand, investor demand has been abysmal, which has had the biggest short-term impact on prices, according to analysts.

However, analysts have said that a rise in investor fear sentiment could drive renewed safe-haven demand for gold.

"You don't have to look very hard to find things to worry about in this economy and as this fear grows, gold becomes a lot more attractive," said Bob Minter, director of ETF Investment Strategy at abrdn.

Although gold made some significant gains on Friday, analysts note that there is still some work to be done. Hansen said that gold is carving out a bottom, and now investors need to see how high prices can go.

He added that he wants to see prices break above initial support at $1,675. However, the ultimate target is around $1,730 an ounce.

"We can confidently call the bottom if prices can get back above $1,735. That will put gold back in a bullish uptrend," he said.