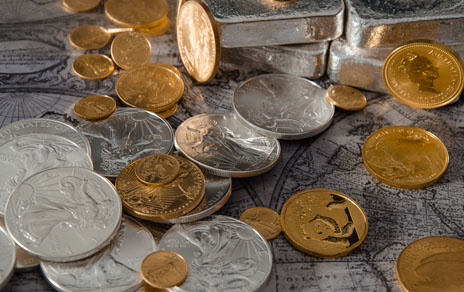 (Kitco News) - The U.S. Mint continues to see lackluster demand for its American Eagle gold and silver bullion coins; however, analysts note that global demand for physical gold remains healthy in October as the precious metal flows from West to East.

The U.S. Mint said that it sold 62,500 ounces of gold in various denominations of America Eagle Gold bullion coins. Gold coins sales were up 25% from September’s low; however, compared to last year, demand for gold bullion is down 59%.

The silver market is seeing a pickup in demand, with sales hitting their highest level in five months. The U.S. Mint said it sold 1.258 million ounces of silver in October. Silver demand increased 51% from September. For the year, silver bullion sales are down 17%.

While the U.S. Mint has dominated the bullion market in the last few years, some analysts note that it is not an accurate picture of global demand.

The Perth Mint said it saw record demand for its gold bullion and healthy demand for silver.

At the same time, it said that it sold 1.995 million ounces of silver last month, down 23% from September but up 48% from last year.

Neil Vance, general manager of minted products at the Perth Mint, said that bullion sales actually started to pick up in late September.

"Demand from clients in the USA and Germany was incredibly strong," Vance said in a statement from the mint.

Some analysts have noted that the U.S. Mint has had some production issues, which has limited supply and driven premiums for bullion coins to record highs. Earlier this year, the premium on Silver America Eagles were nearly 100% as demand outstripped supply.

He added that because Australia is closer to major Eastern gold hubs, it could be easier for them to ship their bullion compared to the U.S.

Meanwhile, in the U.S., investors have mostly shunned precious metals as prices have dropped.

Millman noted that the Eastern flow of gold is a pattern that is often repeated in low-price environments. He added that the market saw the same trend from 2013 to 2015.

"Consumers in India and China see gold as a fundamental asset and a global currency. As threats to the global economy rise, they look to precious metals to preserve their wealth," he said. "I think the West makes a mistake when it ignores these larger market trends.

Millman added that he expects investors worldwide to pay more attention to gold as the world teeters on the edge of a global recession.

Phillip Newman, managing director at Metals Focus, said that demand for physical gold and silver is healthy. However, he also noted that while rising coin sales may not drive prices in the near term, it could provide an important floor in the market.

"If a floor is well defended, that could encourage some new investment demand," he said. "However, real rates and the U.S. dollar are rising, which still creates a challenging environment."