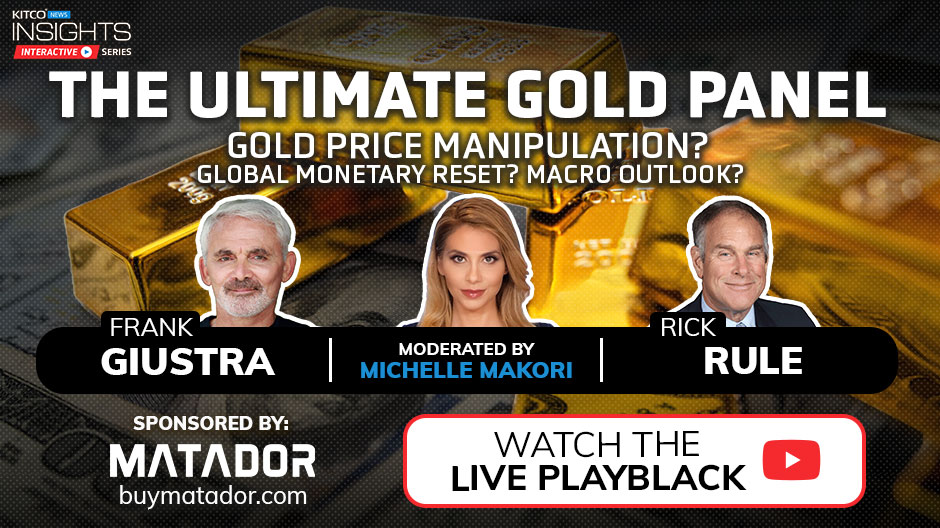 (Kitco News) - Whether it's deliberate or not, the U.S. government's and the Federal Reserve's ability to manipulate gold prices through interest rates and the strong U.S. dollar could be coming to an end, according to two titans in the precious metals sector.

Frank Giustra, CEO of Fiore Group, founder of Lionsgate Entertainment and a special advisor to the Board of Directors of Aris Gold, and Rick Rule, former CEO of Sprott, and current President of Rule Investment Media, agreed that gold remains an important store of value as the U.S. dollar's dominance as the world's reserve currency continues to be challenged.

In Kitco News' latest Live Panel Discussion, Giustra and Rule addressed the contentious issue of manipulation in the gold market. Giustra said that since the 1970s, there has been a concerted effort in the U.S. to keep a lid on gold prices to ensure the U.S. dollar is the world's reserve currency.

"The U.S. system is based on a paper asset play; to do that, you need a supreme U.S. dollar. Gold gets in the way of that," he said. "If the U.S. dollar lost its supreme reserve status, it would be catastrophic. A weak U.S. dollar is an existential threat."

Rule said he sees a weak gold price as a consequence of the Federal Reserve's monetary policy as it continues to support the U.S. dollar; however, he added that he doesn't see a global conspiracy actively working to suppress the gold market.

However, Rule also said that the current environment of U.S. dollar strength, driven by rising interest rates, which in turn is weighing on gold, could be coming to an end. The Federal Reserve is running out of room to raise interest rates as the nation deals with massive debt.

"The government's ability to manipulate the U.S. dollar with interest rates is coming to an end," he said. They won't be able to suppress gold by raising interest rates much higher.

"They can't continue to raise interest rates without imploding the system," he said.

But it is not just the gold market. Rule and Giustra agreed that the U.S. dominance in global financial markets is starting to wane.

"The international monetary reset is happening. It's already in play," said Giustra.

"Countries have no choice but to reduce their exposure to the U.S. dollar because it has been weaponized," added Rule.

Both analysts noted that nations are starting to see gold as a valuable alternative to the U.S. dollar. Last week the World Gold Council reported that central banks bought nearly 400 tonnes of gold in the third quarter, the largest quarterly accumulation going back to the 1960s.

Giustra noted that central banks have actually been net gold buyers since the 2008 financial crisis.

"Why would central banks be stocking up on gold for the last 12 years without some reason?" he said.

Both Giustra and Rule said that in the current environment of rising economic uncertainty, now is the time to own some gold as an insurance policy.

"Having some gold helps me to sleep at night," said Rule.

As to where the price of gold is going, both Rule and Giustra said that they don't necessarily want to see higher prices as that would paint a bleak picture of the health of the global economy.

"The consequences of gold going to $15,000 would be dramatic for the economy," said Rule.

New York to charge crypto companies for their supervision