This is the reason why this central bank is accumulating gold, and it's one of the top buyers right now 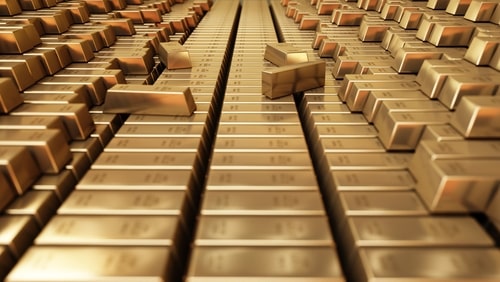 (Kitco News) Uzbekistan's central bank — one of the top reported gold buyers in the third quarter — is on the gold mission, boosting its precious metal share of foreign reserves to nearly two-thirds of its $32 billion total.

This contradicted the country's earlier intent to cut the precious metal portion of reserves to below 50% and buy more U.S. and Chinese sovereign debt.

"We thought about investing in Treasuries, but then the market itself didn't let us do it," the Uzbek central bank's deputy chairman, Behzod Hamraev, told Bloomberg this week.

Uzbekistan now has one of the highest percentages of precious metals in reserves, according to the World Gold Council.

The Central Bank of Uzbekistan has been a consistent buyer, and in the third quarter, it added 26 tons to its gold reserves, second only to Turkey, which was the top-known buyer with 31 tons bought.

Central banks bought nearly 400 tons in the third quarter, the most on record, according to the World Gold Council's quarterly report. Year-to-date, the official sector acquired 673 tons, more than any other annual total since 1967 — when the U.S. dollar was still backed by gold.

When gold marked new record highs of above $2,000 an ounce in 2020, Uzbekistan's central bank made the decision to stick with gold. "Prices were really good, and we continued with gold," Hamraev said.

Sanctions introduced against Russia following its invasions of Ukraine this year boosted the case for holding gold on the balance sheet, especially after almost half of Russian foreign exchange reserves got frozen.

Uzbekistan plans to use peaks in gold prices to sell some of the precious metal. And back in March, when prices approached record highs again, the central bank took advantage of the opportunity and sold about 50 tons. "Usually, as soon as a crisis starts, gold rallies," Hamraev said. "Will it happen when the liquidity is shrinking? That's the big question."

Since then, gold has struggled, reporting seven consecutive months of losses — the longest losing streak in more than five decades. However, in November, the sentiment began to shift, with prices rising more than $100 since the start of the month.

"There are two factors for us: the current price and the future price," Hamraev said. "Is the price rising, or has it reached its peak and is coming down? This is the moment we are looking for. If the price is rising, we are better off waiting with sales."

Uzbekistan also buys its domestically produced gold, which equals to about 100 tons a year. Year-to-date, it bought 86.5 tons, pushing its total holdings to 399 tons.

Hamraev also joked in the interview that he wouldn't mind if Uzbekistan's reserves were 100% in gold, even though that would be impossible since central banks need to have some cash on their balance sheets.

In its Q3 report, the WGC also noted a sizeable unknown contingent of central bank buyers. "The level of official sector demand in Q3 is the combination of steady reported purchases by central banks and a substantial estimate for unreported buying," the WGC's report pointed out.

Countries known for not reporting their gold purchases regularly include China and Russia. "Not all official institutions publicly report their gold holdings or may do so with a lag. It's also worth noting that while Metals Focus suggests purchases occurred during Q3, it's possible they may have started earlier in the year," the report noted.