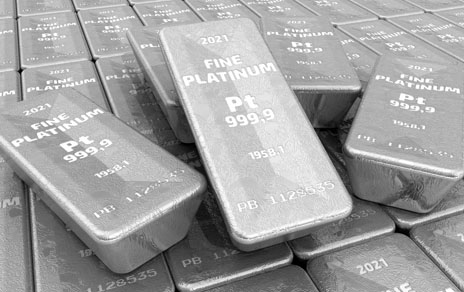 (Kitco News) - Although the platinum market has seen a significant surplus in 2022, the market is expected to get a lot tighter next year, with the World Platinum Investment Council forecasting a sizable deficit.

Tuesday, the WPIC released its platinum Quarter report, which looked a platinum demand for the third quarter and provided initial estimates for 2023.

The analysts revised the expected surplus for this year to 804,000 ounces, a decline of about 17% from its second-quarter projections. However, the biggest highlight of the report is an expected 1.1 million-ounce swing in the supply of the precious metal.

"It's a significant change in direction," Edward Sterck, director of research at the council, said in an interview with Kitco News.

The analysts said that they expect platinum to see a supply deficit of 303,000 ounces in 2023 as global demand rises above 7.7 million ounces and supply remains reasonably stable, growing by only 2%.

While the platinum supplies have been volatile in the last few years, Sterck said there is a strong chance the market will see tighter conditions moving forward. He added that demand continues to grow while supply struggles to keep up.

"I don't think we are going to see the supply response to growing demand," he said. "Producers might want to respond to the supply and demand imbalance, but I don't think they will be in a position to do so anytime soon.

There are already signs of producers struggling to keep up as the WPIC said that supply is expected to decline 10% this year to 5.63 million ounces, lower than levels seen pre-pandemic.

At the same time, industrial demand, led by the automotive sector, continues to grow. The report said platinum usage in the auto sector increased by 143,000 ounces in the third quarter, jumping 25% from last year. Sterck said that the auto sector continues to struggle with supply chain issues and production is below traditional recessionary levels.

Sterck added that if the microchip shortage continues to improve, demand for new cars will continue to grow, even in the midst of a recession. For 2023, the WPC expects the auto sector to consume 324,000 ounces of platinum, an 11% increase from this year.

Total industrial demand is expected to rise by 10,000 ounces this year, a 2% increase from last year. The WPIC sees a 10% increase in demand next year.

"Driven by anticipated growth in capacity expansions and ongoing strong demand in China, as well as fibreglass plant projects in Egypt, glass demand is expected to jump by 52% to 481 koz," the report said.

However, looking ahead, the WPIC sees bar and coin demand growing 49% next year, driven by Japanese investors. Physical demand is expected to rise to a three-year high in 2023.

"Outflows from exchange warehouses (-20 Koz) and liquidations of ETF holdings (-275 kHz) are expected to slow, resulting in net investment of 212 koz in 2023," the analysts said in the report.