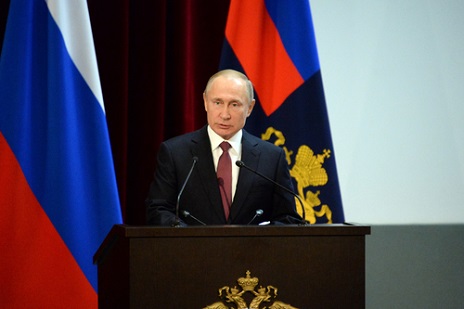 (Kitco News) - During a recent speech at the International AI Journey Conference in Moscow, Russian President Vladimir Putin called for the creation of an independent blockchain-based settlement network to combat the monopoly of the global financial payments system currently held by Western banks.

“The technology of digital currencies and blockchains can be used to create a new system of international settlements that will be much more convenient, absolutely safe for its users and, most importantly, will not depend on banks or interference by third countries,” the Russian president said. “I am confident that something like this will certainly be created and will develop because nobody likes the dictate of monopolists, which is harming all parties, including the monopolists themselves.”

Putin called for the new system in response to the international sanctions placed on the country following its invasion of Ukraine, which he referred to as “illegal restrictions.”

“All of us know very well that settlements are one of the possible methods of attack under the current circumstances of illegal restrictions. Our financial institutions know this better than anybody else because they are working under them,” the president said in his speech at the event.

The Russian leader went on to highlight that it’s not just Russia but all countries around the world that are held at a disadvantage when using the current system, which is largely controlled by a small number of countries.

“The existing system of international payments is expensive, the system of its correspondent accounts and regulation are controlled by a narrow club of states and financial groups,” he noted.

The speech from Putin follows last week’s announcement that Russian lawmakers in the Ministry of Finance and the Central Bank of Russia were working to develop amendments that would allow the launch of a national crypto exchange.

The amendments seek to establish a legal framework for a national exchange, which must first be presented to and approved by the central bank. Tax revenue was cited as one of the main reasons for the establishment of a regulatory framework around cryptos by Sergey Altuhov, a member of Duma’s Committee of Economic Policy.

“It makes no sense to deny the existence of cryptocurrencies, the problem is they circulate in a large stream outside of state regulation,” Altuhov said. “These are billions of tax rubles of lost tax revenues to the federal budget.”

Anatoly Aksakov, chairman of the Duma Financial Markets Committee, echoed these sentiments, saying that the “passage of the law will bring this activity into the legal field, and make it possible to form a law enforcement practice on issues related to the issuance and circulation of digital currencies.”