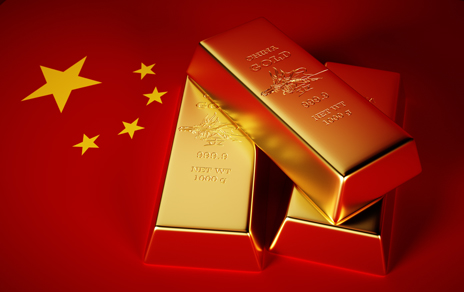 (Kitco News) - Chinese gold demand appears to be cooling as the nation saw a sharp drop in imports in October, according to trade data from Hong Kong.

Monday, the Hong Kong Census and Statistics Department said that China imported 18.7 tonnes of gold through the island last month, a drop of 45% from September. This is the second month of sharp declines as September imports fell by roughly half compared to August.

However, Hong Kong's trade data only provides a partial picture of Chinese gold demand. While direct mainland imports are down, they are not as severe as flows from the island. According to customs data from Switzerland, 43.7 tonnes of gold was exported to mainland China, down slightly from 44 tonnes in September.

Carsten Fritsch, precious metals analyst at Commerzbank, said that lower gold imports could be due to the government's latest harsh COVID-19 restrictions and lockdowns. Despite lower imports, he said that there are still signs of healthy demand in China.

"Gold dealers in China sold gold at sizable price premiums of $23-45 per troy ounce on the world market price in October, which points to solid demand and insufficient supply," he said.

In another sign of a healthy market, Fritsch noted that gold imports from Switzerland have increased 70% in the first ten months of 2022 compared with last year.

Ray Jia, senior analyst of China's gold market for the World Gold Council, noted in a report in early November that October is seasonally a slow period for Chinese wholesale demand.

"Manufacturers actively replenish gold in September ahead of the traditional peak gold consumption season, and this usually leads to lower wholesale gold demand in October," he said.

However, he also noted that the larger-than-expected drop in demand appears to be COVID-related.

Looking ahead, Jia said that he expects gold demand to pick up again by year-end as Chinese consumers prepare for the Lunar New Year in January.

"COVID-related uncertainty will remain a key risk factor to China's gold demand during Q4," he said. "Nonetheless, seasonality suggests that both retail, wholesale gold demand should rise as we approach the year-end. This will be driven primarily by consumer gifting demand ahead of the Chinese New Year's holiday."