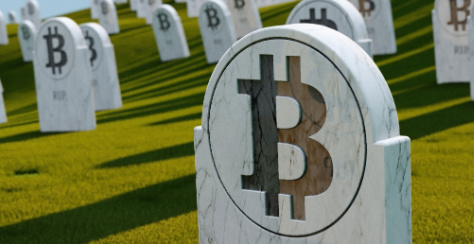 (Kitco News) - As crypto markets continue to reel from the collapse of FTX, they’ve been able to take solace in the relative price stability of Bitcoin. But European Central Bank (ECB) officials made it clear on Wednesday that even if BTC appears to hold its value, they see no future for the flagship cryptocurrency.

“For bitcoin proponents, the seeming stabilization signals a breather on the way to new heights,” wrote Ulrich Bindseil, ECB Director General for Market Infrastructure and Payments (MIP), and Jürgen Schaaf, an advisor to the Senior Management of MIP on the ECB blog. “More likely, however, it is an artificially induced last gasp before the road to irrelevance.”

The authors say that bitcoin has been marketed as a “global decentralised digital currency,” and was created “to overcome the existing monetary and financial system.” But they say that bitcoin’s design and technological limitations make it a poor means of payment. “Real Bitcoin transactions are cumbersome, slow and expensive,” they write. “Bitcoin has never been used to any significant extent for legal real-world transactions.”

They also attack bitcoin as an appreciating asset. “Bitcoin is also not suitable as an investment. It does not generate cash flow (like real estate) or dividends (like equities), cannot be used productively (like commodities) or provide social benefits (like gold),” they write. “The market valuation of Bitcoin is therefore based purely on speculation.”

Bindseil and Schaaf characterize bitcoin as a speculative bubble that is dependent on “waves of new investors” to prop up its value. “Big Bitcoin investors have the strongest incentives to keep the euphoria going,” they write, adding that large investors “fund lobbyists who push their case with lawmakers and regulators. In the US alone, the number of crypto lobbyists has almost tripled from 115 in 2018 to 320 in 2021. Their names sometimes read like a who's who of US regulators.”

The ECB officials also criticize lawmakers who they say have touted the “supposed merits of Bitcoin” and given the public the impression that cryptocurrencies are an asset class like any other.

“Yet the risks of crypto assets are undisputed among regulators,” they write. “In July, the Financial Stability Board (FSB) called for crypto assets and markets to be subject to effective regulation and supervision commensurate with the risks they pose - along the doctrine of ‘same risk, same regulation.’”

They lament the slow pace of ratification for crypto legislation, and they say that even when the laws are in place, implementation lags further behind. They also say that different jurisdictions have different senses of urgency. “While the EU has agreed on a comprehensive regulatory package with the Markets in Crypto-Assets Regulation (MICA), Congress and the federal authorities in the US have not yet been able to agree on coherent rules.”

The ECB officials say that part of the problem with regulation is that it has been influenced by “misconceptions,” including the belief that “space must be given to innovation at all costs” and that blockchain technology would be transformational simply because it is new.

“Firstly, these technologies have so far created limited value for society - no matter how great the expectations for the future,” they write. “Secondly, the use of a promising technology is not a sufficient condition for an added value of a product based on it.”

They refer to the “supposed sanction of regulation” as a problem, because it has convinced the conventional financial industry to make bitcoin more accessible to their customers. “The entry of financial institutions suggests to small investors that investments in Bitcoin are sound.”

They also condemn bitcoin for its environmental impact. “One Bitcoin transaction consumes hardware comparable to the hardware of two smartphones,” they write. “The entire Bitcoin system generates as much e-waste as the entire Netherlands.”

“Since Bitcoin appears to be neither suitable as a payment system nor as a form of investment, it should be treated as neither in regulatory terms and thus should not be legitimized,” they conclude.

It’s worth noting that bitcoin’s demise has been predicted many times. According to 99bitcoins’ Bitcoin Obituaries counter, BTC has died 466 times, including twice already this month.