(Kitco News) - Little has changed for the crypto market since last Wednesday – when Bitcoin (BTC) first climbed above $17,000 – as the price action in the market has gone sideways, with bulls and bears looking equally matched in the first week of December.

While the crypto market showed resilience in trading on Monday, the same cannot be said for the traditional markets as investors reduced their level of activity ahead of a busy week of economic data. At the close of markets in the U.S., the S&P, Dow and Nasdaq all finished in the red, down 1.79%, 1.40% and 1.93%, respectively.

Data from TradingView shows that Bitcoin got the day off to a hot start, climbing to an intraday high at $17,425 prior to the Wall Street open, only to reverse course and hit a daily low of $16,876 before bullish reinforcements stemmed the slide and bid it back to $16,965.

The early morning rally pushed Bitcoin’s price to a three-week high according to Kitco senior technical analyst Jim Wyckoff, who noted that “prices are now in a fledgling uptrend on the daily bar chart” in his morning Bitcoin update.

In the battle for control of the price action, “Bulls have the slight near-term technical advantage to suggest the path of least resistance for prices is sideways to higher in the near term,” Wyckoff concluded.

Watch for a retest of the range low

According to Poppe, Bitcoin price is currently trading below the range low, which “can be considered bearish as long as it remains at that level." 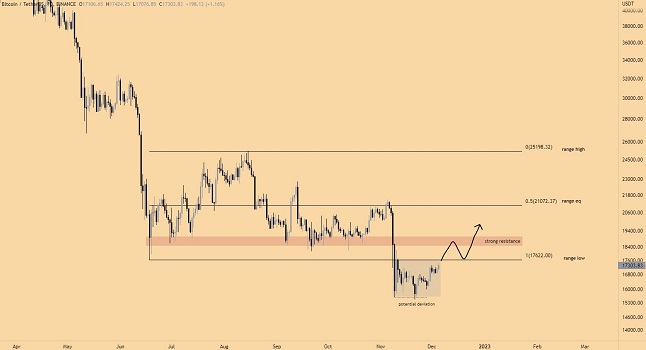 It's not all doom and gloom, however, as Bitcoin “made a sweep at the most recent low, removing liquidity,” which Poppe said, “is often a sign that a reversal is about to take place, which is what we are currently seeing play out.”

“A reclaim of the range, as shown with the arrow, would make the outlook a lot more bullish,” he said. “From here, therefore, the expectation is that price will shoot back into the range, reject the initial strong resistance around $18.5-19k and then come down for a retest of the range low.”

Should the market play out in this fashion, Poppe suggested that a retest of the range low is “the perfect entry for a longer-term long position.”

The altcoin market largely followed Bitcoin’s lead to trade sideways on Monday, while a trio of tokens went against the grain to post double-digit gains.