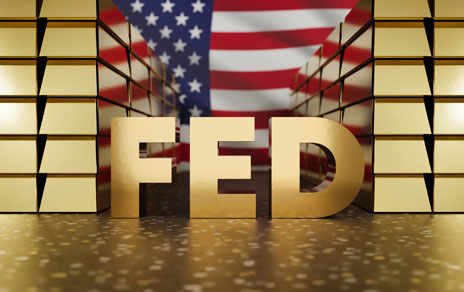 (Kitco News) - The gold market, seeing a solid breakout from last month's two-year lows, appears to be getting comfortable around $1,780 an ounce; however, one bank is warning investors that gold's recovery looks fragile.

In his latest report, Carsten Fritsch, precious metals analyst at Commerzbank, said that gold prices had rallied nearly $200 since the start of November as markets reacted to the Federal Reserve's plan to slow the pace of rate hikes starting in December.

"An end to the rate hike cycle is thus edging closer. In anticipation of this, bond yields have fallen noticeably and the U.S. dollar has shed some of its previous gains again. Consequently, the headwind that gold has been facing from this side has switched to tailwind," he said.

While gold has benefited from these shifting expectations, Fritsch warned that a slowdown doesn't necessarily mean the Federal Reserve is ready to pivot. He added that in the current environment, it might be difficult for gold prices to hold sustainable gains above $1,800 an ounce.

"Even though the rate hike cycle will end in the foreseeable future, interest rates will probably remain at the elevated level they will then have reached for quite some time after," he said.

With the Federal Reserve's monetary policy set for next week, Fritsch said that gold investors need to pay attention to the expected terminal rate more than the face of future rate hikes.

According to the CME's FedWatch Tool, markets see the U.S. central bank pushing the Fed Funds rate to a peak between 5.00% and 5.25%.

"If interest rate expectations increase any further following the upcoming Fed meeting because the Fed believes a higher rate level to be necessary, gold could come under pressure," he said. "The same would happen if the U.S. dollar were to appreciate again."

In the near term, Commerzbank said there is a risk gold prices retest support at $1,750 an ounce. Fritsch said that despite gold's rally, there is some hesitancy in the marketplace.

He noted that investors continue to liquidate their holdings in gold-backed exchange-traded products.

"It is not a good sign that even the marked price increase has not prompted any rethink and that skepticism continues to prevail," he said.

However, looking past short-term weakness, Commerzbank remains long-term bullish on the precious metal. The German bank expects gold prices to hold relatively steady through 2023, ending next year at around $1,800.

"Though we expect the price to decline further to $1,750 per troy ounce in the coming weeks, gold should begin to climb again as soon as the first Fed rate cut comes into view. This can be expected in the second half of the coming year," he said.