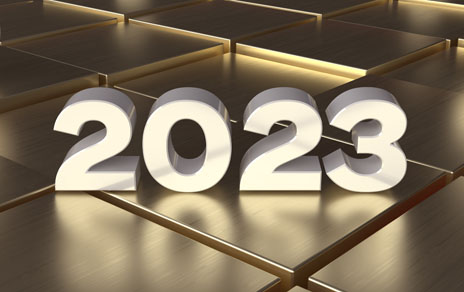 (Kitco News) - After a difficult year filled with challenging headwinds, the gold market is ending 2022 on an upswing in roughly neutral territory at around $1,800 an ounce.

The precious metal is looking to end the year down less than 2%, which would make it one of the best-performing assets, just behind the U.S. dollar. While bullish sentiment is building in the marketplace, some analysts are warning investors that they will need to be patient in 2023.

Although the gold market is expected to continue to outperform most asset classes in the new year, some major banks and commodity analysts are not expecting to see a significant push higher until the second half of the year. For now, gold prices are expected to remain in neutral territory at around $1,800 an ounce.

Conditions that weighed on gold through most of the year, mainly the Federal Reserve's aggressive monetary policy stance, could remain in place through at least the first half of 2023.

In its last monetary policy meeting for 2022, the Federal Reserve forecasted the Fed Funds rate peaking above 5% in 2023. The central bank's updated forecast capped a year that saw the most aggressive tightening cycle since 1981 as inflation rose to a more than 40-year high.

Although inflation has come down from its summer highs, Federal Reserve Chair Jerome Powell said that the central bank's job isn't finished.

"We're not at a restrictive enough stance even with today's move … We'll get to that point, and then the question will be, how long do we stay there? And there is the strong view on the committee that we'll need to stay there until we're really confident that inflation is coming down in a sustained way, and we think that that will be some time," he said in a press conference Dec. 14.

While the Federal Reserve continues to take a firm stance on inflation, economists note that the central bank is closer to the end of its tightening cycle, which could be good for gold.

Bank of America looks for the Federal Reserve to end its tightening cycle in March and sees the first rate cut by the end of 2023.

In this environment, Michael Widmer, commodity strategist for Bank of America, said that gold prices have a path to $2,000 an ounce.

Commodity analysts at Commerzbank are also expecting the Federal Reserve to cut interest rates by the end of the year. However, they added that in the short-term, gold prices could struggle as investors adjust to a new terminal rate hike above 5%.

"After what is expected to be the last interest rate hike in March, a period of unchanged rates is likely to follow before the Fed cuts the key rate again toward the end of 2023 in view of a weak economy and lower inflation. The Fed, on the other hand, is not yet forecasting this. As soon as the Fed also adopts this view, the gold price should rise again," said analysts at the German bank.

"This should be the case in the second half of next year, because by then, inflation will have fallen far enough and the U.S. economy will have been in recession since the beginning of the year. The gold price should also be supported by the weakening of the U.S. dollar expected by our currency strategists."

Although the Federal Reserve is slowing the pace of rate hikes, it will continue to tighten its monetary policy in the new year, limiting investor interest in gold.

However, many analysts have said the precious metal is building a new foundation from which prices are expected to rally. Many analysts see gold prices holding support above $1,600 an ounce.

Douglas Groh, senior portfolio manager at Sprott Asset Management, said in a recent interview with Kitco News that shifting economic trends could mean that the world is entering a period of higher inflation.

He added that it is unlikely the Federal Reserve will be able to get inflation back down to its 2% target and this higher inflation environment will be a long-term positive for gold as investors look to protect their purchasing power.

Groh explained that the global energy transition which is driving demand for raw commodities like copper, and nations developing their own domestic supply chains, will keep consumer prices elevated for the foreseeable future.

"The geopolitical environment has changed and we are going to see the globalization trend reverse in the next few years," he said. "Bringing manufacturing back to the west and the global energy transition won't be resolved in 2023. It's going to take a lot of money to address these issues and that is going to keep inflation elevated for the next few years."

T.D. Securities is among the most bearish on gold in 2023. The Canadian bank sees the precious metal falling to $1,575 by the first quarter of next year.

"The very strong probability that rates will drop considerably before the two percent inflation target is reached should prompt many investors to buy gold to compensate for the lack of meaningful real returns across much of the Treasury curve," they wrote.

Inflation remains a positive for gold in 2023

Along with Bank of America, Saxo Bank is one of the most optimistic on gold ahead of the new year. Ole Hansen, head of commodity strategy at the Danish Bank, said that he doesn't expect the Federal Reserve to bring inflation under control.

"The risk of a recession and the FOMC hiking into economic weakness – potentially without succeeding in getting inflation under control - continues to strengthen the upside risk for investment metals in 2023," he said.

Although inflation is expected to be down from the 2022 highs, it is still likely to remain elevated through 2023.

The Federal Reserve sees core inflation rising 3.5% in 2023, which is relatively in line with consensus estimates ranging between 3% and 4%.

In its preliminary estimate, the University of Michigan reported that consumers see inflation rising 4.6% next year.

Analysts have said that an optimistic scenario for gold would be if the Federal Reserve and other central banks raise their inflation target.

Although investment demand was lackluster through 2022, the precious metal saw historic demand from central banks.

As of the end of the third quarter, central banks bought 673 tonnes of gold, the most since 1967. At the start of December, China, for the first time in three years, reported that it bought 32 tonnes of gold in November.

Juan Carlos Artigas, global head of research at the World Gold Council, said in a recent interview with Kitco News that although this year's purchases have been extremely elevated, it's a continuation of a trend that’s been building for more than a decade.