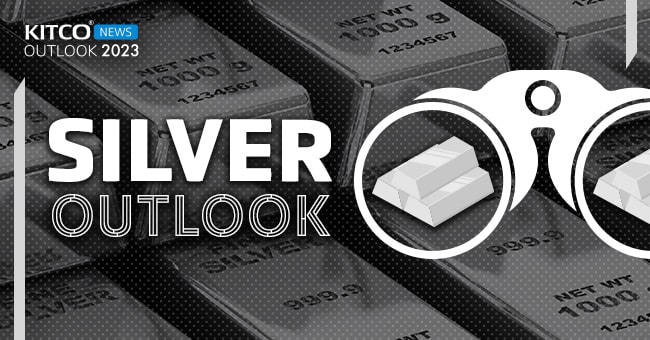 (Kitco News) Silver is gearing up to outperform gold in 2023 after a mixed year, according to analysts, who point to a more positive macro environment, strong physical demand, and a good technical set-up.

Next year looks promising for both gold and silver, but many analysts expect silver to rally more than the yellow metal because of its volatility profile and the lack of attention it received in the prior two years.

Silver saw most of its gains in the first quarter of this year, hitting $27 an ounce, which is similar to gold's trading pattern. Then it saw losses for six months, hitting a 2-year low of $17.50 in September. In the fourth quarter, prices started to pick up as investors began to anticipate a pivot by the Federal Reserve.

"I'm a little more positive on silver in that we're back to $23 an ounce. It's the high beta play," Wells Fargo head of real asset strategy John LaForge told Kitco News. "In a year where stocks are down, precious metals essentially follow stocks down. In that kind of environment, you'd expect silver not to be flat, which is better than gold's performance."

One major driver that held silver and other precious metals back this year was the Federal Reserve's aggressive tightening cycle with a total of 425 basis points for 2022.

"This increased cost of carry for pretty much everything. The U.S. dollar increased to 20-year highs, and inflation continued to rise this year. All of that created a perfect storm, and managed money has been moving away from non-yielding assets, which have been a drag on their portfolios in this high-interest rate environment," explained Mitsubishi Corporation head of business development Jonathan Butler.

LaForge noted that commodities have been in a supercycle since 2020, with silver looking to play a special role, especially considering how cheap it is relative to other commodities. "When you are in supercycle, you often find high-beta plays do better. Between 1999-2011, silver did much better than gold."

Silver has been neglected by investors, which is why it has a lot of potential at current price levels, Gainesville Coins precious metals expert Everett Millman told Kitco News. "Silver will outperform gold — that is the pattern that tends to play out during bull runs for precious metals. And its recent action is encouraging," Millman said.

Macro drivers are shifting, and it's good for the price

The macro environment is shifting from a negative to a positive one for the precious metals, and silver is already running ahead of gold.

"Silver gives signs that whatever weakness we see in gold is probably short-lived. Usually, when silver starts beating gold, we are closer to a bull market in precious metals versus the other way," LaForge said. "You can see it in the last couple of months, with all the talk of the Fed pivoting and things changing in 2023, precious metals perked up. I think next year they'll both do well."

The biggest macro driver supportive of higher prices is a Fed pivot. Even though an actual pause, a slowdown, or even cuts might be months away, precious metals are already anticipating that and are starting to move.

"Silver should benefit from the end of the Fed's interest rate hikes and the speculation on interest rate cuts that will start thereafter. The expected economic recovery following the end of the recession should additionally benefit silver as a precious metal with a high industrial use. With the easing of corona restrictions in China, silver demand should receive a further boost, as China is the largest consumer of silver," said Commerzbank analyst Carsten Fritsch.

According to Metals Focus, global silver demand is up 16% at 1.2 billion ounces as of mid-November.

And the silver market remains tight, with the Silver Institute and Metals Focus stating that the physical silver market, which excludes ETFs, is projected to show the most significant supply deficit in decades this year.

"This is expected to amount to 194 million ounces (6 thousand metric tons), meaning demand will outstrip supply by nearly 20%," Fritsch said. "The driving factor behind this is a 16% surge in silver demand to a record level."

Industrial demand for silver was at a record in 2022, reaching 539 million ounces, according to Metals Focus managing director Philip Newman. With so many countries focused on energy security, silver saw new demand come from solar panel installations, which hit new highs this year, Newman added during an LBMA webinar summarizing silver.

The automotive sector also contributed to additional demand, particularly the electrification of vehicles, added Butler. "The average silver content per vehicle is increasing," he said.

Retail bar and coin investment demand are up 18% at 329 million ounces, also at a record peak, added Metals Focus.

The outlook for next year sees all these factors remaining in place. "Industrial demand should continue to benefit from electrification of the vehicle fleet, 5G technology, and the government-driven rollout of green infrastructure such as photovoltaics. Physical investment demand should be buoyed unabated by fears of high inflation," said Fritsch.

Analysts warned that there are several headwinds to monitor for 2023, including a recessionary slowdown impacting the industrial side of silver.

"China's regional lockdowns are a threat to some of the demand for next year and possibly beyond in terms of PV and conventional chemical application for silver," Butler explained. "There is an increased risk of 2023 being a recessionary year for Europe. That will impact some industrial sectors as well."

A recession could put a damper on industrial demand but not enough to make silver a recessionary casualty, said OANDA senior market analyst Edward Moya. "Silver is going to do well next year, just like gold, Moya told Kitco News.

The U.S. market remains a solid support factor, especially with additional funding coming from the Inflation Reduction Act, Butler pointed out. "We are seeing a great deal of investments into PV and electrification. That is ultimately good for silver. Meanwhile, the U.S. economy is bubbling along with some decent growth rates, which helps lift up conventional applications for silver in electronics and chemical applications."

In contrast to robust physical demand is the lack of interest from institutional investors.

There were strong outflows from silver ETFs, amounting to more than 4,000 tons year-to-date in mid-November, Fritsch said, citing Bloomberg's data. "The year that is coming to an end is likely to show by far the strongest ETF outflows since the launch of this investment product 16 years ago," said Fritsch.

Global exchange stocks fell by around 400 million ounces year-to-date, touching 1.3 billion ounces, including London and COMEX markets, according to Metals Focus. "Quite staggering figures that you had depleted from these two locations alone," Newman said.

Disinterest from the professional side is one of the reasons why silver has not done better this year, according to StoneX's Head of Market Analysis for EMEA and Asia Regions Rhona O'Connell.

The price of silver does not always respond to higher physical demand. When there is more demand, the local premiums go up instead.

This is why this year, premiums skyrocketed in the silver market. For example, the retail premium on U.S. Eagles was $17 an ounce, noted Butler. "The end-consumer seems quite happy paying basically 100% markup for a silver Eagle," he said.

These high premiums for the physical metal across the globe also led to a shift in how the precious metal is getting delivered.

In 2022, 60% was delivered by air, which was unprecedented. "Silver usually travels by sea freight. [Freight by air is now] possible because of the high premium. Demand is so insatiable, they don't want to wait two or three months for a sea container to arrive," Newman pointed out.

In India, people are paying 25 cents an ounce to have silver flown in from London storage, which typically takes two days. In comparison, silver delivered by sea would cost 5 cents an ounce and take about four weeks or more, explained BullionVault's director of research Adrian Ash during an LBMA webinar on silver.

Many analysts are not ruling out silver hitting new record highs within this commodities supercycle or within this decade. But for next year, predictions vary, with the trading range remaining fairly wide.

"Silver could very well hit record highs in this supercycle. Average cycles last about 15-16 years. They are getting shorter. The new highs in silver could still be five years away. We are in year three of the supercycle. New highs are common in all supercycles. But it doesn't happen right away," LaForge said.

Millman's high-end target for next year is around $28-$30 an ounce. "Even though silver tends to outperform gold, it is also volatile. The trading range is wider than gold. Investors should also be cautious of major pullbacks where we get back to $20 or lower," he warned.

Fritsch sees silver at $25 an ounce by the end of the year.

Bank of America forecasts silver peaking at $25 an ounce next year. "While upside may be limited near-term, mine supply is constrained, so a rebound of commercial purchases is set to ultimately push prices higher," the bank said in its outlook. "[Supply] should also be supported by rising demand from solar panel and electric vehicle manufacturers, as the global community focuses on tackling climate change."

Participants of the LBMA's latest conference saw silver at $28.30 next year. "That's an awful lot of anticipation around silver," said Ash.