Will the U.S. dollar dominate in 2023? King Dollar's "last hurrah" before bearish trend kicks in 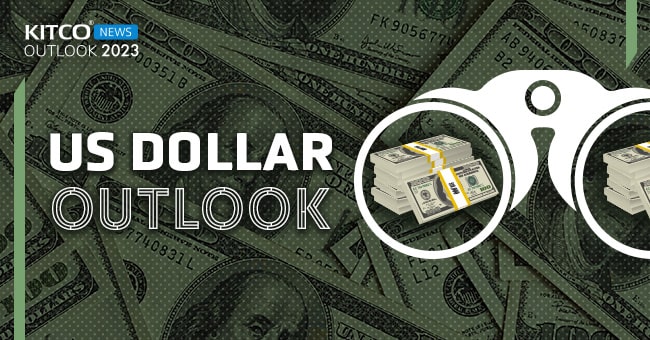 (Kitco News) The U.S. dollar was one of the winning trades of 2022, peaking in September at 20-year highs, up around 20% against a basket of currencies. But will it dominate next year as markets price in a slower hiking cycle, recession fears, and other external factors like China's reopening?

This year started with bullish USD sentiment that intensified when the Federal Reserve began its aggressive tightening cycle in March. Since then, the Fed has hiked by a total of 425 basis points, bringing the federal funds rate to a range between 4.25%-4.5%.

The Fed was one of the main drivers that pushed the U.S. dollar higher. On top of that, poor stock market performance has turned many investors to embrace the greenback as a safe-haven currency.

Looking into 2023, the Fed remains hawkish despite the slightly smaller increase of 50 bps this month versus the 75 bps hikes employed at the previous four meetings.

At the December press conference, Fed Chair Jerome Powell said rates were not "restrictive enough" even after this year's historic hiking cycle.

"We've raised 425 basis points this year, and we're into restrictive territory. It's now not so important how fast we go. It's far more important to think about what is the ultimate level. And … how long do we remain restrictive? That will become the most important question," Powell said.

The key question for the U.S. dollar next year is how long the Fed will need to keep rates elevated. For next year, the median forecast for the federal funds rate is 5.1%, with GDP projected to come in at 0.5% and the PCE inflation to slow to 3.1% in 2023, according to the Fed's latest economic projections.

Many analysts see strength in the U.S. dollar trade from the beginning until the middle of next year, with central bank meetings and inflation data setting the tone for 2023.

"FX markets are assuming that central banks can signal the all-clear on inflation and deliver gentle easing cycles to ensure soft landings in 2023. We suspect the reality will not be quite as kind to financial markets," said ING's FX strategists Chris Turner and Francesco Pesole. "We back a stronger dollar into early 2023."

The Dutch bank sees the Fed taking rates to 5.00%. "Fed rate cuts in 2H23 may not be enough to weaken the dollar if Europe and China are still struggling to grow," the strategists added.

Wells Fargo views 2023 as the greenback's "last hurrah" before the bearish trend kicks in.

"The greenback can experience a bout of renewed strength into early 2023. With the Fed likely to deliver more hikes than markets are priced for, a hawkish Fed should support the greenback," said Wells Fargo in its 2023 outlook. "We believe the Fed is likely to deliver more interest rate hikes than financial markets are priced for, and indeed more tightening than many other central banks."

However, by the middle of next year, the outlook changes as the U.S. economy starts to slow, weighing on the greenback.

"Starting in the middle of next year, we believe growth differentials between the United States and major foreign economies should start to favor international G10 countries, and these growth dynamics should be a contributing force to a sustained dollar depreciation," Wells Fargo said. "We expect the United States to enter recession only during the second half of next year."

But Gundlach doesn't believe the Fed will be able to keep rates at these levels for more than one meeting before being forced to cut.

"You get to 5%, you repeat it, and then the market thinks it will start falling," DoubleLine Capital CEO Gundlach said during a December webcast. "The bond market is pricing in that the fed funds rate one year [later] will be the same as the fed funds rate at the December meeting. This leads me to wonder, why even bother with these hikes? Dig a hole just to fill it back in."

Gundlach warned that the Fed might not even make it to 5% as the data is "weakening too rapidly."

The DoubleLine Capital CEO is looking for a weaker dollar in 2023, stating that "dollar has peaked out." In 2023, the Federal Reserve could end up being more dovish than other central banks, which is what the dollar traders could already be anticipating, Gundlach explained.

The U.S. dollar index could see a correction between 15%-20% next year, said CrossBorderCapital.

"A stronger U.S. dollar has been a feature of the 2022 bear market in risk assets. U.S. monetary tightness and a rush of foreign capital into U.S. safe havens have lifted the U.S. unit. 2023 will likely see a reversal of both drivers as policy-makers clamber to underpin fragile sovereign debt markets with liquidity and so trigger a 15-20% correction in the U.S. dollar," CrossBorderCapital said.

Predictions of a sideways U.S. dollar action are also popular with analysts for 2023.

Towards the middle and end of 2023, ING's outlook on the dollar is more contained and filled with increased volatility.

"Conditions do not look to be in place for a clean dollar trend – no 'risk-on' dollar decline nor 'risk-off' dollar rally. And central banks tightening liquidity conditions through higher policy rates and shrinking balance sheets will only exacerbate the liquidity problems already present in financial markets. Volatility will stay high," the bank's strategists explained.

Other factors to weigh on U.S. dollar

Recovery in emerging markets is a significant development that could hurt the greenback next year.

"EM equities are likely to recover as EM currencies strengthen and the U.S. dollar weakens," said Ned Davis Research chief investment strategist Tim Hayes in his outlook for next year. "We are entering 2023 with the bearish dollar position assumed in November. And in recognizing the dollar's inverse correlation with gold, the positive influence of declining yields, and the recent buy signal from the aggregate indicators in our Gold Watch report, we moved to bullish on gold last week."

China's reopening is another theme to watch in 2023, especially as the country relaxes COVID measures and battles a surge in cases.

"China is the elephant in the room when it comes to the global growth outlook for 2023 – a weak 1H23 seems likely, but this will then be followed by far stronger growth in 2H23 – after a poor 2022, Chinese assets could really outperform in 2023," said Pepperstone's head of research Chris Weston.

There is still a lot of uncertainty around China's reopening due to COVID and several economic imbalances, noted Bannockburn Global Forex chief market strategist Marc Chandler.

"The optimistic outlook would see a turn to more stimulus from China, reanimation of the property market, and a relaxation of Covid restrictions in the first part of next year. The reopening of supply chains, the sharp drop in shipping costs, and energy may help blunt the impact of the tightening to allow for relatively short and shallow contractions," Chandler said.