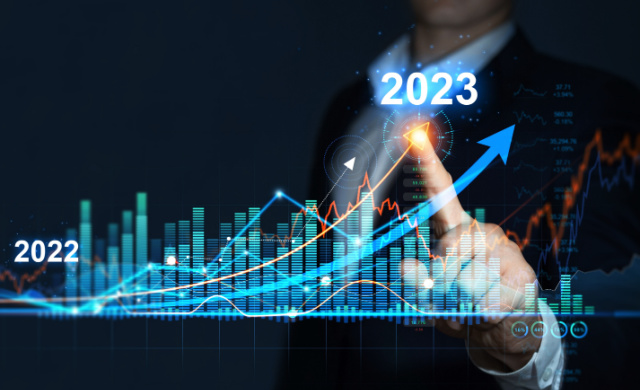 (Kitco News) - The gold market has seen a solid end to 2022 and according to one research firm, its momentum in the fourth quarter should continue into 2023.

In its 2023 outlook, analysts at BCA said that they see gold prices pushing above $1,900 an ounce next year. The positive outlook comes as the firm started building a bullish position in November.

The research firm is bullish on gold as they expect a peak in the Federal Reserve's monetary policy, persistently high inflation and global economic uncertainty to support prices through the new year.

"The evolution of gold prices next year will hinge on Fed monetary policy and its impact on the USD's trajectory," the analysts said in the report. "Given a backdrop of elevated uncertainty next year and a dovish Fed, which will weaken the USD, safe-haven demand for gold will rise."

Currently, markets are expecting the U.S. central bank to raise interest rates to a peak between 5.00% and 5.25% in the first half of the year. BCA said that as recession fears grow, it expects the central bank to start cutting rates by the end of the year or early 2024.

Although inflation has fallen from its highs in the summer, BCA warned investors that the threat remains and the analysts see a risk of it becoming unanchored in 2023.

"We expect the Fed will remain behind the inflation curve, as it targets core inflation when conducting monetary policy, not headline inflation," the analysts said. "This will unmoor currently well-anchored inflation expectations since, we believe, it is headline inflation – chiefly energy and food prices – that drives households' and firms' wage and price decisions."

"In the longer run, E.M. central banks will be keen to replace U.S. dollars with gold in their reserves, so as to insulate themselves from the risk of Western financial sanctions the likes of which Russia is dealing with now," the analysts said.

The biggest risk to BCA's bullish outlook is the persistent inflation threat, which they said would force the U.S. central bank to maintain its aggressive monetary policies.

"Higher interest rates will increase the opportunity cost of holding non-yielding bullion and will support the U.S. dollar, which is anti-correlated to gold,'' the analysts said.