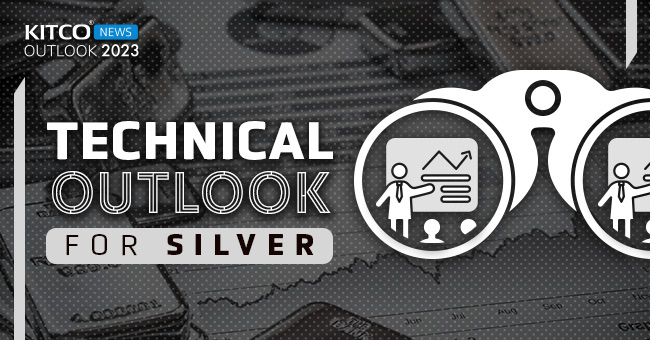 (Kitco News) - The longer-term weekly continuation chart for nearby Comex silver futures favors the bullish camp. Prices have been trending up since the August 2022 low and in December hit an eight-month high. A price move above major psychological resistance at $25.00 would get the silver bulls charged up, from a longer-term technical basis, to suggest significantly more price upside in the coming months.

A drop below major psychological support at $20.00 an ounce would be significantly longer-term bearish and would then open the door to sustained and extended price weakness. My bias is that silver prices in 2023 will range from $22.00 to $27.31 and with an upward trend.

As an added bonus to my silver special, I want to share with you some valuable trading advice dispensed by William Delbert (W.D.) Gann, who is regarded as one of the pioneers of technical analysis and market behavior. He wrote several books on stock and commodity trading and developed the well-known "Gann angles" and "Gann Fans."

Gann was born near Lufkin, Texas, in 1878. His rise to trading fame is a remarkable story. He was the oldest of many children on his family farm, and did not even finish grade school. Back then, it was not uncommon for the oldest boy to quit school at a relatively young age and stay at home to help out on the farm. However, W.D. did not want to be a farmer. He wanted to be a businessman. For a short period of time he worked for a brokerage in Texas while attending business school at night. He then set out for New York City in 1903.

Gann’s 28 trading/investing rules below have stood the test of trading time.

1. Amount of capital to use:  Divide your capital into 10 equal parts and never risk more than one-tenth of your capital on any one trade.

3. Never overtrade.  This would be violating your capital rules.

4. Never let a profit run into a loss.  After you once have a profit, raise your stop loss order so that you will have no loss of capital.

5. Do not buck the trend.  Never buy or sell if you are not sure of the trend according to your charts and rules.

7. Trade only in active markets.  Keep out of slow, dead ones.

8. Equal distribution of risk.  Trade in 2 or 3 different commodities if possible.  Avoid tying up all your capital in any one commodity.

9. Never limit your orders or fix a buying or selling price.  Trade at the market.

10. Don’t close your trades without a good reason.  Follow up with a stop loss order to protect your profits.

11. Accumulate a surplus.  After you have made a series of successful trades, put some money into a surplus account to be used only in emergency or in times of panic.

12. Never buy or sell just to get a scalping profit.

13. Never average a loss.  This is one of the worst mistakes a trader can make.

16. Never cancel a stop loss order after you have placed it at the time you make a trade.

17. Avoid getting in and out of the market too often.

18. Be just as willing to sell short as you are to buy.  Let your object be to keep with the trend and make money.

20. Be careful about pyramiding at the wrong time.  Wait until the commodity is very active and has crossed Resistance Levels before buying more and until it has broken out of the zone of distribution before selling more.

21. Select the commodities that show strong uptrend to pyramid on the buying side and the ones that show definite downtrend to sell short.

22. Never hedge a trade. If you are long of one commodity and it starts to go down, do not sell another commodity short to hedge it.  Get out at the market: take your loss and wait for another opportunity.

23. Never change your position in the market without a good reason.  When you make a trade, let it be for some good reason, or according to some definite rule; then do not get out without a definite indication of a change in trend.

24. Avoid increasing your trading after a long period of success or a period of profitable trades.

26. Do not follow another man’s advice unless you know that he knows more than you do.