Platinum was the top precious metal in 2022, here's how the others did 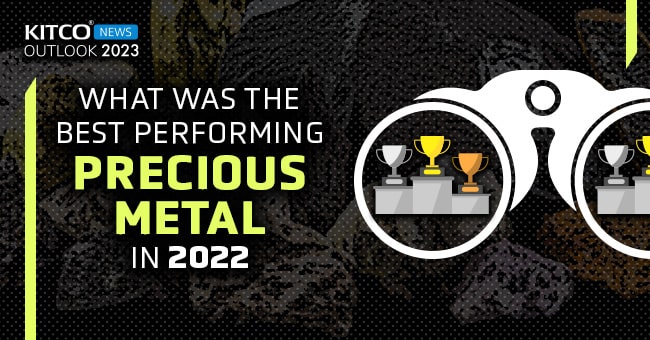 (Kitco News) Precious metals had a very mixed performance in 2022. And if not for the last quarter of the year, the results would have been very different.

"Thanks to an impressive recovery in the final quarter, the gold price ended the year at virtually the same level it began it. Silver and platinum achieved year-on-year gains of 2.8% and just shy of 11%, respectively," said Commerzbank analyst Carsten Fritsch.

The times each precious metal hits its yearly lows also differed. Palladium saw its biggest losses towards the end of the year, while gold, silver and platinum saw their yearly lows in September. The highs were reached around the same time for all four precious metals — at the beginning of March, which was in reaction to Russia's invasion of Ukraine.

The World Platinum Investment Council (WPIC) said in its latest quarterly report that the global platinum market is projected to be in a deficit of 303 koz in 2023. Global platinum demand is said to rise by 19% (to 7,770 koz) while supply edges up only by 2% (to 7,466 koz).

The WPIC cited supply constraints and increased bar and coin demand, revising the market surplus forecast for 2022 down by 17% to 804 koz.

"The platinum market is forecast to be in deficit after two consecutive years of significant surpluses. This reflects supply that remains well below pre-pandemic 2019 levels and demand growth, despite the unfavorable economic outlook," said World Platinum Investment Council CEO Trevor Raymond. "Platinum [is] in a somewhat unique position versus other commodities in that demand is forecast to continue to grow, despite the recessionary outlook."

The WPIC's report revealed that the automotive platinum demand was up 25% year-on-year in the third quarter of 2022.

"A combination of higher passenger vehicle production numbers, tighter emissions legislation for HDVs in China and India, as well as growing substitution of platinum for palladium will see a 12% (+329 koz) expected increase in platinum demand this year, to 2,964 koz," the report said.

Another boost for platinum prices could be wage pressure and power constraints at mines in South Africa, the world’s number one producer of platinum.

Obstacles for precious metals in 2022

The biggest macro hurdle for precious metals in 2022 has been a historic tightening by the Federal Reserve, which saw the most rapid hiking pace since the early 1980s. Overall, rates climbed by 425 basis points in 2022, rising to a range between 4.25%-4.5%.

"In view of the considerable headwind generated by the pronounced rate hikes implemented by central banks, in particular the Fed, last year's performance of the gold, silver and platinum prices was thus remarkable," Fritsch said.

And the last quarter of the year was so favorable for precious metals because markets started to price in a Fed pivot next year.

During the last meeting of the year, the Fed slowed to a 50 basis point increase but remained very firm in its battle to bring inflation down, warning markets that rates are not at a restrictive-enough level and will have to stay higher for longer.

"We've raised 425 basis points this year, and we're into restrictive territory. It's now not so important how fast we go. It's far more important to think about what is the ultimate level. And … how long do we remain restrictive? That will become the most important question," Fed Chair Jerome Powell told reporters after the December FOMC meeting.

On the possibility of a soft landing, Powell also noted that the longer the Fed needs to keep rates higher, the narrower the runway becomes. "I don't think anyone knows whether we're going to have a recession or not. And if we do, whether it's going to be a deep one or not, it's just not knowable," he said.

More rate increases are already priced in by the markets for February and March. But many analysts forecast a pause after that, followed by potential rate cuts towards the year-end.