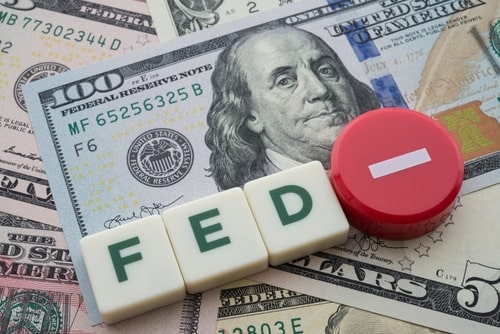 (Kitco News) The gold market was able to hold some of its daily gains following the release of the Federal Reserve's December meeting minutes, with price trading above the $1,850 an ounce level.

At the December meeting, Fed officials confirmed their commitment to bringing down inflation and warned against "unwarranted" loosening of financial conditions.

The meeting minutes also revealed that officials were worried about any "misperception" in financial markets around their actions.

"Participants noted that, because monetary policy worked importantly through financial markets, an unwarranted easing in financial conditions, especially if driven by a misperception by the public of the committee's reaction function, would complicate the committee's effort to restore price stability," stated the minutes of the Federal Open Market Committee's December 13-14 meeting.

During the last meeting of the year, the Fed slowed to a 50 basis point increase but remained very firm in its goal to bring inflation down to 2%. Fed Chair Jerome Powell also warned the markets that rates are not at a restrictive-enough level and will have to stay higher for longer.

In the minutes, officials noted that a slower pace of rate hikes does not mean an easing of financial conditions.

"A number of participants emphasized that it would be important to clearly communicate that a slowing in the pace of rate increases was not an indication of any weakening of the Committee's resolve to achieve its price stability goal or a judgment that inflation was already on a persistent downward path," the minutes said.

Fed Chair Jerome Powell told reporters after the December FOMC meeting that the longer the U.S. central bank needs to keep rates higher, the narrower the runway for a soft landing becomes. "I don't think anyone knows whether we're going to have a recession or not. And if we do, whether it's going to be a deep one or not, it's just not knowable," Powell said.

The minutes revealed that officials recognize the "significant progress" made after rates climbed by 425 basis points in 2022 and worry about the potential risk of over-tightening.

"The lagged cumulative effect of policy tightening could end up being more restrictive than is necessary to bring down inflation to 2 percent and lead to an unnecessary reduction in economic activity, potentially placing the largest burdens on the most vulnerable groups of the population," the minutes said. "Most participants emphasized the need to retain flexibility and optionality when moving policy to a more restrictive stance."

Another highlight was the minutes stating that "no participants anticipated that it would be appropriate to begin reducing the federal funds rate target in 2023."

Fed officials also aligned with Powell's overall message, pointing out that a restrictive policy stance would need to be maintained for "some time."

Following the release of the Fed’s meeting minutes, gold was largely unchanged, with February Comex gold futures last trading at $1,856.70 an ounce, up 0.57% on the day. Earlier in the session, gold hit a fresh six-month high of $1,871.30 but has since pared those gains.