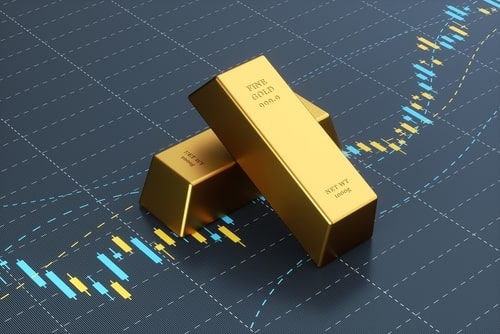 (Kitco News) After kicking off the new year at 6-month highs, gold is seeing its $1,900 target slipping away. Analysts blame a tight U.S. labor market, which directly impacts the level of hawkishness the Federal Reserve will embrace in 2023.

The gold market was just $29 away from $1,900 on Wednesday. The precious metal traded at the highest levels since June, driven by additional safe-haven demand coming from investors pricing in a recession.

However, the momentum ran out of steam when the Federal Reserve December meeting minutes showed Fed officials aligning with Powell's message that a restrictive policy stance would need to be maintained for "some time."

Fed officials confirmed their commitment to bringing down inflation and warned against "unwarranted" loosening of financial conditions, adding that they were worried about any "misperception" in financial markets around their actions.

"No participants anticipated that it would be appropriate to begin reducing the federal funds rate target in 2023," according to the minutes released Wednesday.

All eyes on nonfarm payrolls after ADP sees strong hiring

Gold saw more losses on Thursday, falling to a daily low of $1,829.90. This was largely in reaction to the private payrolls processor ADP reporting a better-than-expected increase in jobs in December. At the time of writing, February Comex gold futures were trading at $,1837.70, down 1.15% on the day.

A total of 235,000 positions were added last month, ADP said. Market consensus estimates were calling for an advance of just 150,000 after November's data saw an increase of 127,000.

"The economy is clearly weakening, but the labor market refuses to break," said Edward Moya, senior market analyst at OANDA.

The strong ADP data could be a precursor to the highly-anticipated Friday's nonfarm payrolls number for December, which has significant implications for gold.

"Over the past several months, the official number has beaten the ADP number, usually by a lot," said Brad McMillan, chief investment officer for Commonwealth Financial Network. "Layoffs, despite the tech industry headlines, remain very low overall, and the voluntary quit rate (a great indicator of the strength of the labor market) ticked up again even as job openings remain well above pre-pandemic highs. By all of these signs, we can expect a substantial beat tomorrow."

A stronger-than-expected data print will weigh on gold, boosting hawkish Fed rate hike expectations, while any disappointment will help gold maintain its rally above $1,850 an ounce.

"With expectations for 200,000 new jobs, we should not be surprised by something above that, perhaps well above ... Wage growth should also remain at recent strong levels. If that happens, expect the Fed to keep its rate-raising bias and for the markets to react negatively," said McMillan.

Analysts expect the labor market to finally start cooling down in the new year, giving the Fed some room to be more flexible.

"The labor market will show signs of weakening going forward now that corporate America appears to be steadily announcing layoffs and cost-saving measures. For now, the Fed needs to stick to the script and say rates will stay higher for longer," said Moya. "We will probably start seeing jobless claims climb much higher starting next week."

Wells Fargo is pricing in a slowdown in hiring as soon as the December report that is scheduled to be published on Friday. "The buoyancy of nonfarm payroll growth has seemed at odds with other signs that the jobs market is beginning to sour. We look for nonfarm payroll growth to downshift more noticeably in the months ahead, beginning with December's employment report showing hiring slowing to 205,000," the bank said.

Other measures of employment are already showing signs of weakness, including the household survey, PMI employment indices, and the latest Quarterly Census of Employment & Wages, Wells Fargo added.

What this means for gold

Until the labor market starts showing concrete signs of a slowdown, the $1,900 an ounce level will remain out of reach for the gold market, said Moya.

"Gold is struggling as the latest round of economic data suggests the Fed will have a lot of pressure on them to tighten further," he noted. "Labor market weakness is around the corner and until that happens, gold might remain stuck above the $1,800 level."

MKS PAMP is projecting an average price forecast of $1,880 for gold in 2023, citing a slower Fed and rising stagflation and recession risks, which would lead to a peak in the U.S. dollar and U.S. yields.

"Gold has been down (on a hawkish Fed fighting inflation), but it is not out with an upward trajectory from here on out," said MKS PAMP metals strategist Nicky Shiels. "Combination of slower global growth, niggling (but not red hot) inflation and deglobalization ensures gold will return as a safe diversifier in times of escalating uncertainty. 2023 high-low range: $1,600/oz (new physical/fundamental floor) - $2,100/oz (double top)."