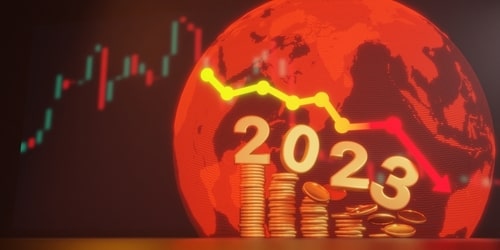 (Kitco News) The World Bank warned that the global economy could fall into a recession as growth sharply slows and economic conditions remain fragile.

In its Global Economic Prospects report, the World Bank has cut global growth to 1.7% for 2023. This is down from the 3% expected just six months ago. For 2024, the organization sees growth at 2.7%.

"The sharp downturn in growth is expected to be widespread, with forecasts in 2023 revised down for 95% of advanced economies and nearly 70% of emerging market and developing economies," the report said.

The drivers behind this dramatic slowdown are stubborn inflation, high interest rates, reduced investment and the war in Ukraine, the World Bank said.

There are also a number of triggers that could send the global economy easily into a recession this year. These include higher-than-expected inflation, sudden additional increases in interest rates, a resurgence of the COVID-19 pandemic, or renewed geopolitical tensions, the report pointed out.

"This would mark the first time in more than 80 years that two global recessions have occurred within the same decade," the World Bank said Tuesday.

Advanced economies are expected to slow to 0.5% from the previous estimate of 2.5% in 2023. The U.S. economy is projected to grow just 0.5% this year. The euro area is looking at 0% growth, while China is estimated to see growth at 4.3%.

"Over the past two decades, slowdowns of this scale have foreshadowed a global recession," the report said.

The World Bank also sees risks of elevated core inflation weighing on the outlook. Stubborn inflation could lead to more central bank tightening after a year of synchronized and unprecedented hikes by central banks worldwide.

In response to the report, gold continued to trade above $1,850 an ounce, eyeing the $1,900 an ounce level after the precious metal hit seven-month highs on Monday. At the time of writing, February Comex gold futures were trading at $1,881.70, up 0.21% on the day.

Gold also continues to track the U.S. dollar closely, said MKS PAMP head of metals strategy Nicky Shiels. "Gold remained in a tight range largely capped below $1,880, and in sync with the US$," Shiels said Tuesday.

The yellow metal has gained traction on the idea that the Federal Reserve will be less hawkish in the new year, said FXTM senior research analyst Lukman Otunuga.

"Given how last Friday's mixed jobs report has fanned speculation around the Fed slowing its rate hikes, further upside could be on the cards," Otunuga said Tuesday. "Gold's outlook is likely to be influenced by the upcoming U.S. inflation report. A further cooling in prices in December and lower bond yields would be a welcome development for zero-yielding gold. Looking at the technical picture, bulls remain in a position of power with the next key level of interest found at $1,900."