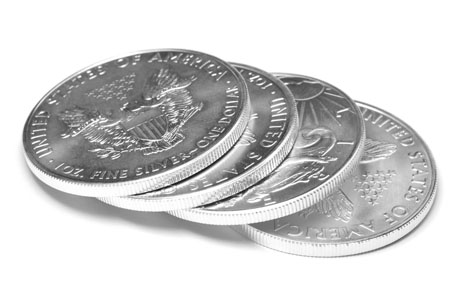 (Kitco News) - The U.S. Mint's disappointing sales numbers in 2022 are raising some questions among bullion professionals and retail investors; however, according to some analysts, these issues are also a part of a more significant trend in the global precious metals marketplace.

Last year the U.S. Mint sold slightly less than 16 million one-ounce American Eagle silver coins, a drop of 43.5% from sales of more than 28.2 million coins sold in 2021. Sales of American Eagle coins dropped to their lowest level since 2019.

However, analysts note that the reduced sales weren't due to a lack of investor interest. Analysts have reported solid global demand for silver bullion throughout 2022. An indication of investor interest has been record-high premiums for American Eagle coins, pushing above 70%.

Michael Fuljenz, president of Universal Coin & Bullion and chair of the National Coin and Bullion Association American Silver Eagle sales committee, said that there are systemic issues impacting the production and supply of American silver bullion coins. He added that these issues could continue to persist in 2023, which means consumers will continue to face persistently high premiums.

Fuljenz said the biggest problem is that the mint buys silver blanks from private mints. Blanks are silver disks that are then transformed into coins.

Analysts have noted that the U.S. Mint has had difficulty maintaining its supply of blanks as it competes with growing overseas demand.

"The U.S. Mint either needs to start making their own blanks or be more competitive and pay more or loosen their conditions when it comes to buying them," said Fuljenz. "If the Mint had more blanks, they would probably have had sales matching 2020 and 2021, and premiums would not have risen from about $3 over the spot silver price to $14 over the spot silver price in two years."

Tom Power, president, and CEO of Sunshine Mining, which supplies the majority of the U.S. Mint's silver blanks, said his company is running at full capacity trying to keep up with growing global and domestic demand.

He added that the silver market continues to deal with supply chain and production issues, particularly a shortage of skilled labor.

"There is no shortage of silver or the raw metal out there, but there are still ongoing production issues as we all continue to suffer from a labor shortage," he said. “This has been going on for two years now and we could see it last another year or two."

Power added that even if he could increase capacity at Sunshine, it would take 12 to 16 months to get the equipment he would need.

"We are giving the U.S. Mint everything we can afford to give them," he said.

Along with ongoing supply issues, the U.S. Mint also has to compete with unprecedented global demand.

Everett Millman, a precious metals expert at Gainesville Coins, said that the supply issues the U.S. Mint faces are part of a much bigger trend as a wealth of precious metals flow from Western nations to Eastern countries. Many analysts have noted that India has seen an insatiable appetite for silver bullion, with record imports in 2022.

Millman explained that this is a trend the precious metal sector sees every time there is a significant drop in gold and silver prices.

"Investors in the East seem to always take advantage of these price dips to stock up on precious metal," he said. "When prices start to rise, we see the reverse and the metal flow back to the West."

Millman added that in this environment, it's not surprising that the U.S. Mint would have difficulty finding enough silver blanks to meet domestic demand.

"If there is more demand in the East and that is driving prices, then that is where the gold and silver are going to go," he said.

Although consumers could continue to face higher premiums through 2023, Millman said that healthy demand in the East is a strong indicator that prices will eventually rise.

"Traditionally, investors in the East are not looking to buy gold to make a quick profit but are concerned about preserving their wealth and hedge against ongoing currency debasement," he said. "Those dynamics are good reasons why we see gold flowing to the East."

Millman said that he expects the tide in the precious metals market to shift when gold prices rise to $2,000 an ounce.