After a three-month rally, silver sees profit-taking; is this a signal for gold at resistance levels? 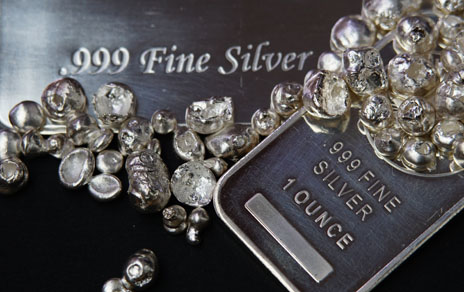 (Kitco News) - After outperforming gold in November and December, the rally in silver has slowed, with prices falling below $24 per ounce.

March silver futures last traded at $23.57 an ounce, down 1.50% on the day. As selling pressure picks up, analysts have said they are watching initial support at $23.26.

Some analysts note that after silver's 40% rally from two-year lows in September, the precious metal saw some solid profit-taking at resistance at $24.50. The selling pressure comes as the U.S. dollar appears to have found renewed support after significant selling pressure. The U.S. dollar Index is seeing solid support around 102 points, a seven-month low.

The near-term peak in silver comes as many analysts expect prices to continue to push higher. Commodity analysts at Commerzbank said that they see the silver market pushing above $25 an ounce by the end of the year as investor and industrial demand support higher prices.

"Industrial demand should continue to benefit from electrification of the vehicle fleet, 5G technology, and the government-driven rollout of green infrastructure such as photovoltaics. Physical investment demand should be buoyed unabated by fears of high inflation," the analysts said in their 2023 outlook forecast.

For some analysts, however, weaker silver prices don't bode well for the overall market in the near term.

Ole Hansen, head of commodity strategy at Saxo Bank, is warning investors that silver could be leading gold prices lower as the yellow metal has hit solid resistance around $1,950 an ounce.

"#Silver's continued dismal performance relative to #gold and #copper is raising the risk of a general setback. XAUXAG trades near a 7-week high >82 while the dollar and yields are both poking higher. In gold, we watch $1895 support as a potential trigger," he said in a comment on Twitter.

"After outperforming gold in November and December, silver now seems to be treading water, hovering around US$24/oz. The lack of momentum in silver is also in sharp contrast to other industrial metals such as copper, which recently hit a 7 month-high," the analysts said.