Idea of minting $1 trillion platinum coin to avoid U.S. default is back and Yellen weighs in 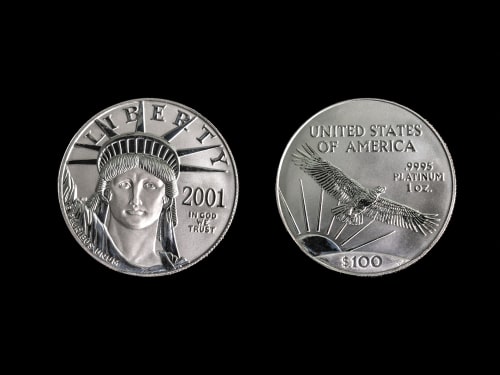 (Kitco News) As the debt ceiling debate takes over the headlines in the U.S., so is the idea of minting a $1 trillion platinum coin, which is a surprising option available to the Treasury Department to raise the debt ceiling without bipartisan support.

The #MintTheCoin plan is gaining traction in some circles again as a deeply divided Congress makes the debt ceiling debate extra difficult, with fierce arguments on both sides of the aisle around debt, inflation, and the path forward.

According to the Treasury Department, the U.S. is bumping up against the current borrowing limit of $31.4 trillion. And if the debt ceiling is not raised, the federal government could run out of money to pay all its bills by June.

In a letter to Congress, Treasury Secretary Janet Yellen warned that there is "considerable uncertainty" around how long these extraordinary measures could be effective.

"I respectfully urge Congress to act promptly to protect the full faith and credit of the United States," Yellen said in the letter sent last week.

On the $1 trillion platinum coin loophole, which potentially allows the Treasury Department to mint platinum coins of any denomination and deposit them at the Federal Reserve in exchange for the U.S. federal debt, Yellen was very skeptical.

In an interview with The Wall Street Journal, Yellen said that the Federal Reserve is unlikely to agree to such a plan, calling the scheme a "gimmick."

"It truly is not by any means to be taken as a given that the Fed would do it, and I think especially with something that's a gimmick," she said in an interview published Sunday. "The Fed is not required to accept it, there's no requirement on the part of the Fed. It's up to them what to do."

The minting of a $1 trillion platinum coin loophole is in the law that dictates the mintage of coins. The exact wording can be found in the subsection (k) of 31 USC 5112, which governs "Denominations, specifications, and design of coins."

The clause states: "The Secretary may mint and issue platinum bullion coins and proof platinum coins in accordance with such specifications, designs, varieties, quantities, denominations, and inscriptions as the Secretary, in the Secretary's discretion, may prescribe from time to time."

Theoretically, U.S. Treasury Secretary Janet Yellen can order the platinum coin to be minted and avoid a government shutdown if the debt ceiling is not raised in time.

Important to keep in mind that the coin doesn't technically have to be made out of $1 trillion worth of platinum. It would require some platinum to be used, but it can be as small as a dime, with the U.S. Treasury assigning any value to it, including $1 trillion or even more.

Several Biden administration officials and Democrats once again started to talk about this option. The issue was also raised in the fall of 2021, the last time the debt ceiling had to be raised.

At the time, Yellen also spoke out, stating that she was against the idea. "I'm opposed to it, and I don't believe that we should consider it seriously. It's really a gimmick," Yellen told CNBC in 2021.

This time, the debate could prove even more divisive, with Republicans and Democrats still debating the consequences of inflation and spending following the aggressive monetary policy tightening by the Fed last year.