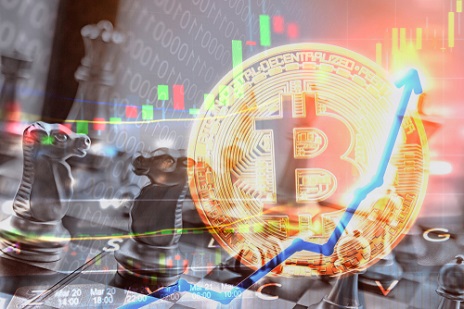 (Kitco News) - The cryptocurrency market fell under pressure during early training on Wednesday and struggled to mount any momentum until later in the afternoon when prices started to trend higher and Bitcoin bulls set their sights on pushing past resistance at $23,000.

Stocks also faced a pullback at the market open and spent the rest of the trading session clawing their way higher in an attempt to get back to even on the day. At the close of markets in the U.S., the S&P and Nasdaq managed to recover most of what was lost, finishing down 0.02% and 0.18%, respectively, while the Dow was able to climb into positive territory and finished the day up 0.03%.

Data from TradingView shows that Bitcoin (BTC) bears made several attempts to push its price lower over the course of trading on Wednesday, ultimately dropping BTC to a daily low of $22,345 before bulls managed to bid it back above $22,800. An afternoon rally saw the top crypto hit a daily high of $23,829.

Kitco senior technical analyst Jim Wyckoff called the early morning drawdown “a routine corrective pullback after this week hitting a four-month high,” and suggested that it had no material impact on the current outlook for Bitcoin.

“The BC bulls still have the solid overall near-term technical advantage amid a steep price uptrend in place on the daily bar chart,” Wyckoff said, which “suggests more price upside is likely in the near term.”

Range bound before climbing to $25k

Further insight into what may come next for Bitcoin was provided by market analyst Duo Nine, who posted the following tweet noting the potential for a pullback to $21,000 or range-bound trading between $22,000 and $23,000.

Lets see if the price makes a lower low. If so, expect a re-test of 21k breakout level.

For now this could also turn out into a large range between 22k - 23k.

A full pullback to the breakout point could be a sign of weakness.#BTCUSD #BTC pic.twitter.com/RMbdIlyzt8

The prospect of range-bound trading was also noted by market analyst Crypto Tony, who provided the following chart that highlights the possibility of a continuation of the uptrend near the middle of February following a corrective wave.

This is what I am looking for on #Bitcoin with a corrective wave now, followed by another leg up to my $25,000 overall

Invalidation is if we began to breakdown from here pic.twitter.com/tzWxIKTTMW

And a final bit of insight on how the current price action for Bitcoin compares to previous cycles was provided by crypto analyst Moustache, who noticed that one specific indicator is signaling that a bull market may be about to start ramping up.

In '15, there was a fakeout, once before the bullrun started.
In '19 and '20, this immediately started a long uptrend.?? pic.twitter.com/VRO6MCVwFk

The downward pressure on the crypto market pushed the majority of altcoins into the red for the day, aside from a few notable standouts that saw their prices surge higher.